Editing women engineers back onto the map 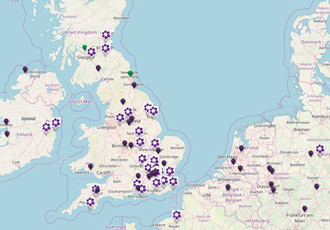 As part of the WES Centenary Trail (a National Lottery Heritage funded project) during its centenary year, the Women’s Engineering Society has chosen to celebrate the lives of many of its past, distinguished members and other notable women engineers in the UK and beyond.

By rediscovering and promoting the achievements of some of its previous members throughout its one hundred year history, the Women’s Engineering Society is aiming to increase public awareness of women’s roles in the history of engineering, as well as providing role models for future generations of women engineers and wider STEM careers.

On 23 June 2019, exactly one hundred years after WES’ foundation, an interactive Centenary Trail Map was launched here to celebrate the people and places that have played a key part in the organisation’s history. The map is currently populated with around 50 pins that link through to Wikipedia entries of significant historical WES members and women engineers. The aim is to increase the number of Wikipedia pins to 200 by the end of the project next May. The map has been developed with support from Wikimedian Dr Alice White, Digital Editor for Wellcome Collection, and Liz Probert, Web Projects Developer for GreenNet.

Elizabeth Donnelly, Chief Executive Officer of the Women’s Engineering Society said: “Throughout our centenary year, we want to really celebrate our history and ensure that the lives and achievements of these incredible women are not forgotten. We also want to make sure that girls growing up today have a wealth of role models to look up to and emulate and to show that, just as much as boys, they can be successful engineers in their own right."

Anyone can get involved by helping to rediscover the lost history of many of our women engineers and participate in a number of Wikithons around the country. These events will delve into the WES archives and help add vital information to existing entries and create new ones.

Below are a number of influential women who played a part in the history of the Women’s Engineering Society:

In World War II she served at sea as an engineering officer in the British Merchant Navy and received awards for bravery under enemy fire. A colleague wrote that she was the "Most courageous woman I ever saw...without fear or nerves, is very good at her job and has an uncanny power over engines for which I once thanked God."

Claudia Parsons (1900–1998) was an engineer and probably the first woman to circumnavigate the globe by car. She became a chauffeur-companion and drove clients across Europe, the Far East, India and America, then in 1938 she bought a Studebaker car in Delhi, nicknamed it Baker and drove with American anthropologist Kilton Stewart through Afghanistan, Iraq, Palestine and Tunisia.

She wrote two romance novels inspired by her travels. The first one was called ‘Brighter Bondage’ and published ‏in 1935. The Woman Engineer Journal review reads: ‘So many of the adventures ring true that one is inclined to speculate as to which bits are purely imaginary. Certainly most of it is less improbable than many of the wild tales we have heard from her. We have heard the book described as ‘good holiday reading’; personally we read it during rather a busy time and found it a holiday in itself”. 84 years later, it is a remarkably undated and very entertaining romp through the world of car, boat and train travel through early 1930s Europe. Claudia Parsons published her autobiography ‘Century Story’ in 1995, which is an equally fascinating read. A short preview of her fascinating life is on her Wikipedia page, which will be improved this year.

Monica Maurice OBE (1908 - 1995) became the first and, for an incredible 40 years, the only woman member of the Association of Mining Electrical Engineers. She began her career in 1930 working for her father at the Wolf Safety Lamp Company (Wm Maurice) Ltd. By 1932, as a director of the Wolf Safety Lamp (Hiring) division, she held responsibility for the supply of lamps to collieries in every important coalfield of the UK.

Maurice joined WES in 1934. In 1951, she became Managing Director and Chairman of the company. During World War II, her knowledge of industry in France and Germany proved valuable and she rose to the rank of Lieutenant Colonel. The V&A own a selection of her glamorous wardrobe including her self designed red wedding dress from the 1940s. Her Wikipedia page was created at a WES Centenary Trail Wikithon in January.

Beatrice Shilling (1909–90) worked as an apprentice for WES President Margaret Partridge’s electrical engineering company for three years, installing wiring and generators. Partridge encouraged her to study electrical engineering at the University of Manchester, where she earned an MSc in mechanical engineering. Shilling raced motorbikes at Brooklands in the 1930s, one of only three women awarded a Gold Star for lapping the circuit at 106 miles per hour.

In 1936 she was recruited as a scientific officer by the Royal Aircraft Establishment (RAE), the research and development agency of the RAF. She apparently refused to marry her colleague George Naylor until he also earned a Brooklands Gold Star. They married in 1938. During WWII she developed the RAE restrictor, a washer with a hole in the middle (nicknamed ‘Miss Shilling's orifice’) to restrict fuel flow to the carburetor of the Rolls-Royce Merlin engines in the Hawker Hurricane and Supermarine Spitfire fighters. Previously, pilots had experienced a loss of power or complete engine cut-out during combat manoeuvres, a potentially lethal disadvantage in the Battle of Britain.

After the war, Shilling worked on the Blue Streak missile and the effect of wet runways on braking. She always rejected any suggestion that as a woman she might be inferior to a man in technical and scientific fields. She and George turned to racing cars, which were tuned and modified in their home workshop. She worked at RAE until her retirement in 1969. The Tilly Shilling pub in Farnborough is named after her.

Jeanie Dicks (1895-1980) was responsible for the first permanent electrification of Winchester Cathedral in 1934. She was the first female member of the Electrical Contractors Association and President of the Winchester Chamber of Commerce. She had won the contract against competition from well-known British and continental firms. It was a complicated job involving five miles of electric cable and she supervised each element herself. To replace the choir-stall gaslights with electricity cables needed to be run through the crypt, which necessitated removing and reburying coffins – except for that of Jane Austen, whom they managed to move gently to one side. To ensure that the lighting was correct Dicks and two of her staff, spent many evenings in the cathedral with the two men up in the roof experimenting with different types of lighting for Dicks to judge for effectiveness down in the nave. The extensive trials resulted in her recommendation for lights hidden by frosted glass.

She had a reputation for knowing what “looks right” and she encountered a certain amount of sexism; clients insisted on speaking with her male staff but she rose above it to ensure that her firm was hired by well-heeled clients. Winifred Holtby, the novelist and journalist, held her up as an example of what women could achieve in the seminal 1935 feminist book ‘Women and a Changing Civilisation’.

Verena Holmes (1889-1964) was the first woman to be admitted to the Institution of Mechanical Engineers, by association in 1924, but it took 20 years for her to be elected as a full member. Holmes gained a BSc in Engineering in 1922. Her technical specialities included marine and locomotive engines, diesel and internal combustion engines. As an early member of WES, she became its President in 1931 and was the first practising engineering president of the Society. Holmes was advisor on the training of munitions workers during World War II. She founded Holmes and Leather in 1946 which employed only women. In 1958, she published a booklet, ‘Training and Opportunities for Women in Engineering’. Holmes held patents for at least 12 inventions including the Holmes and Wingfield pneumo-thorax apparatus for treating patients with tuberculosis, a surgeon's headlamp, a poppet valve for steam locomotives and rotary valves for internal combustion engines.

Dame Caroline Haslett (1895-1957) was the first secretary and later President of the Women's Engineering Society and the founder and editor of its journal ’The Woman Engineer’. An electrical engineer, electricity industry administrator and champion of women's rights, she was co-founder and first Director of the Electrical Association for Women. Her chief interest was in harnessing the benefits of electrical power to emancipate women from household chores, so that they could pursue their own ambitions outside the home. Haslett was the sole woman delegate to the World Power Conference in Berlin in 1930 and represented Britain at later power conferences. During the next 20 years she sat on and significantly influenced the outcomes a large number of committees including those dealing with war time issues and post World War II reconstruction,

Haslett became President of the International Federation of Business and Professional Women in 1950; and was the first woman to chair a government working party. She represented the UK government on business missions in the USA, Canada and Scandinavia, and after the Second World War she took a leading role in conferences organised for women in Germany by the British and American authorities and spoke on the White House lawn with President Truman.

In 1947 she was appointed a member of the British Electricity Authority (BEA), later the Central Electricity Authority, which was formed to run the industry under national ownership. In 1949 the BEA named one of the ships in its collier fleet Dame Caroline Haslett in honour of its first woman member. Her dying wish was to be cremated by electricity.

Later in the year WES will be taking part in Heritage Open Days 2019, a festival which celebrates our history and culture by opening its doors to some little known gems around the country and itself celebrating its 25th anniversary in 2019.

WES will also be running a Lottie Doll Tour to coincide with Tomorrow's Engineers Week in conjunction with Lottie Dolls’s makers, Arklu Ltd. The dolls will be dressed as engineers and travel the country with WES’ Young Members’ Board volunteers, visiting places on the interactive Centenary Map and exploring behind the scenes in current engineering sites, showcasing the huge variety of roles available in the engineering world. Photos and information will feature in a social media campaign using the hashtag #WESLottieTour.