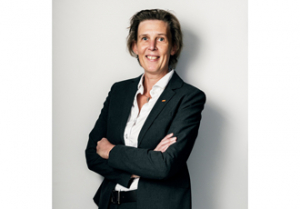 Sandvik’s newly appointed executive management member, Nadine Crauwels, has been inducted into The Women in Manufacturing (WiM) Hall of Fame. The induction celebrates Crauwel’s exceptional contributions to the manufacturing sector - at a time when women represent just a third of the world’s STEM graduates.

Hailing from Belgium, Crauwels was the first female and first non-Swede to be appointed the role of president at Sandvik Coromant.

During her role as president, Crauwels oversaw many landmark developments for Sandvik, including the World Economic Forum’s recognition of Gimo - a Sandvik Coromant manufacturing plant - as a 'Manufacturing Lighthouse', and the site was praised as a world-leader in the adoption of the technologies leading the Fourth Industrial Revolution. Just 54 manufacturing plants in the world share this title.

WiM is dedicated to providing year-round support to women in the manufacturing industry. Induction into the Hall of Fame is based on criteria such as making exceptional contributions to the advancement of women in manufacturing, facilitating programs that motivate young women to choose careers in manufacturing and leading innovations that promote manufacturing improvements and increased competitiveness.

Crauwel’s recognition represents an achievement for the Sandvik Group, and the wider women in manufacturing community. While the number of women working in STEM has increased over the past decade, it’s clear that more must be done to close the engineering skills gap.

“Science and gender equality are both vital for international development,” explained Crauwels. “Over the past decade, the global community has made great effort to inspire and encourage diversity in STEM. Yet women and girls continue to be excluded from participating fully in these roles.

“As part of goal nine of the UN’s sustainability goals, countries around the world pledged to promote inclusive and sustainable industrialisation and foster innovation. Yet currently, around 30% of the world’s researchers are women, women working in STEM fields publish less and often receive less pay and less than a third of female students choose to study higher education courses in subjects like maths and engineering.

“While the Hall of Fame is an honour for myself and my fellow members, it also acts as vital recognition of the contributions women have made to the manufacturing industry. By highlighting our achievements, I hope we can pave the way for an industry that fosters the talents of all engineers.”