Engineering firm calls for a more feminine future for the field 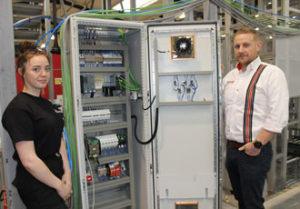 According to a recent survey, just 29% of the UK’s manufacturing and engineering workforce is made up of women. Now, while this highlights a step in the right direction when compared to figures from previous years, multi-disciplinary engineering firm, adi Group, believes more must be done to secure the industry’s workforce for tomorrow.

And with the ongoing coronavirus pandemic continuing to present challenges and cause shifts for organisations and employees alike, the Group welcomes this year’s Women in Engineering Day theme, Engineering Heroes, as a chance to celebrate its contributions thus far, as well as set the tone for the industry moving forward.

James Sopwith, Group Strategic Account Director, explained the progress: “At adi Group, we are continuing to make it our mission to ensure that women in engineering is the norm. Some of our most talented engineers are women and that alone is a cause to celebrate.

“We now live in a world where women can do just as good a job as a man, and we shouldn’t be seeing or hearing about any woman, or anybody for that matter, experiencing discrimination or inequality.”

With that in mind, adi Group provide accessible educational programmes for young girls seeking a career in the field. The firm now offers two apprenticeship programmes, a Pre-Apprenticeship Scheme and the Apprentice Academy, helping the younger generation become the engineers of tomorrow.

As part of its 2018 intake, adi welcomed its first female trade apprentice, Abbie Beaver, who now works as a mechanical engineer.

Beginning her career in fabrication and welding, Abbie was one of the youngest people in the workplace and has continued to have a positive impact on both the business and aspiring female engineers.

So much so that she was previously recognised as one of the Women’s Engineering Society’s top 50 women engineers in the UK. Now, Abbie hopes to inspire other young girls and women to pursue a career in the field.

She said: “We grow up constrained to the idea that engineering is a man’s job. But that couldn’t be further from the truth. There are so many opportunities to grow both personally and professionally within the field, which women are just as capable of pursuing.

“I think it all comes down to debunking any myths and false perceptions early on in our education, which is why I am a strong advocate of the company’s apprenticeship opportunities. They enabled me to see to the reality of life as an engineer, which was far from the oily rags and labour-intensive images I had in my head. Thanks to this opportunity, I am now a qualified mechanical engineer who loves what I do.

“I would highly recommend the job, and in particular the apprenticeship scheme, to any girl out there.”

Abbie isn’t the only success story to come from the firm’s commitment to the industry’s inclusive future either. In fact, Caitlyn Kett-Davies, another apprentice taken on through adi’s educational scheme, is playing an instrumental role in the automotive wing of the business, working with household names across the country with the approval process of their equipment.

Similarly, Melissa Britchford, works for the Group as a test and inspection engineer. With numerous years of experience as a female in the field, Melissa has some advice to offer prospective talent.

“A career in engineering can be incredibly rewarding, but you do need to have thick skin. The job is still seen as something only men do by society, so site visits can sometimes evoke unpleasant comments from people who don’t think you belong or know what you are doing.

“However, with adi’s full support when it comes to training and development, you know you can always look forward to that feeling of satisfaction once you prove these people wrong by getting the job done - and to a high standard at that.

“There are also many aspects of the role where being female works in our favour. For example, I have worked on projects for vulnerable women, who appreciate having a female they can call on, as well as others where my smaller body frame has enabled me to get into spaces an average sized man couldn’t.

“So, like most roles, there are pros and cons, but don’t let the false belief that engineering is a man’s job stop you from pursuing a career in the field.”

adi hopes that by celebrating the success of its female engineers of the present, it can set the tone for the industry going forward. Fortunately, there is demand in the field when it comes to jobs, however, its skills gap is no secret.

James explained: “With the STEM skills gap looming over us, adi’s apprenticeship programmes are a step towards securing a sustainable future for the industry. However, if more focus isn’t given to female careers, we are essentially, missing half of the potential pool of talent. And this will only delay any headway we have made with attempting to close the gap.”

This notion is one that is backed by Boris Johnson as he spoke at the recent G7 summit, with a statement that suggested the post-covid world needs to be more feminine if it is to avoid intensifying any gender inequalities within society.

James added: “While all attention is turned to rebuilding the pandemic-stricken workforce, females cannot be ignored. We urge our colleagues and industry peers to make similar commitments, too. Women have a lot to give and should be encouraged to follow their ambitions like everyone else.”