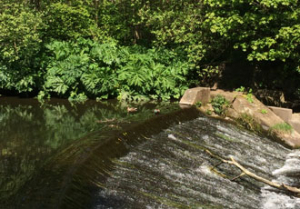 Carruthers Renewables has teamed up with the University of Strathclyde’s Advanced Forming Research Centre (AFRC), part of the National Manufacturing Institute Scotland (NMIS), to explore manufacturing methods for a patented water wheel capable of combating electricity scarcity in developing countries.

The one-year £250k project, funded by the Department for International Development (DFID) and the Engineering and Physical Sciences Research Council (EPSRC) through the Innovate UK Energy Catalyst, is helping the company to exploit the AFRC’s expertise in advanced manufacturing methods before selecting the most cost effective and sustainable way of making the wheels.

Now, the feasibility study has gained letters of support from the likes of the Crown Estate, Scottish Water and the Scottish Environmental Protection Agency, with a computational model of the wheel set to be unveiled at the Hydro 2020 Conference in France later this year - the first to predict behaviour and aid future design of a waterwheel of such a specific geometry. The Carruthers Wheel has a unique smooth water action within the wheel, which explains its high efficiency at an unprecedented range of flows.

The first waterwheel to be patented in 138 years, Carruthers Wheel is truly innovative, producing electricity from waterfalls and rivers with less than five metres drop. This was previously deemed unviable and unprofitable because of the high cost of turbines for small bodies of water.

Following production, the intention is that flat-pack Carruthers Wheels will be shipped to small communities across the world, where they can be installed and maintained by local unskilled workers. In many cases, the wheels will provide electricity to communities for the first time.

Hydro power is the electricity produced from generators driven by turbines that convert the potential energy of falling or fast-flowing water into mechanical energy. Operating at a range of speeds and flows, specially designed blades allow the Carruthers Wheel to harness the full potential of a river to harness a low cost supply of power.

Invented by former maths lecturer turned civil engineer, Penelope Carruthers, the new water wheel does not interfere with the course of the water, making it more environmentally friendly than a traditional mill or turbine installation, which can have a negative impact on a river’s ecosystem.

Penny Carruthers, inventor of the Carruthers Wheel, said: “In the past, sites with lower than a five metre drop have been identified as a possibility for a hydropower before a decision was made to move on due to the high costs. With millions of such sites across the world, there remains a hugely untapped resource, which has the possibility to change the lives of people in the surrounding towns and villages.

“The support we have received from the AFRC so far has been incredible. We have been working together to secure the best manufacturing route allowing easy install and maintenance of the wheel, along with the ability to withstand harsh environments.  Above all, the goal is to make a wheel that will provide electricity to people who are currently living with no access to the grid and the progress made so far has been ground-breaking.”

The AFRC is a specialist technology centre within the National Manufacturing Institute Scotland (NMIS). The business development team works with SMEs to assist with funding bids for projects, matching companies with engineering experts within the centre for manufacturing and broader innovation and business support. Within the Carruthers Wheel project, the Forming Team has played an integral part in developing the consortium and has been responsible for aspects on technical delivery in the design of the wheel.

Ekaterina McKenna, Business Development Executive at the AFRC, said: “According to a recent United Nations hydropower report, there are millions of sites worldwide with a river or waterfall of less than five metres drop, especially across Sub-Saharan Africa and South East Asia. In the small communities surrounding these sites, less than 10% of the population have access to electricity.

“The feasibility project with Carruthers Renewables is allowing us to support this growing startup with its manufacturing engineering needs, including extreme cost effectiveness and ease of maintenance, pushing the boundaries of what is possible, with the hope of taking the hydro- wheel to the next stage of development.

“Carruthers Wheel is a fantastic opportunity to deliver huge positive economic, societal and environmental impact in Scotland, across the UK and across the world.”

More from University of Strathclyde