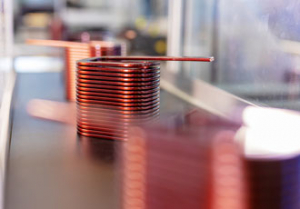 REO UK is set to showcase its range of chokes and transformers at the virtual EMC and Compliance International (EMC&CI) event, taking place on 19th and 20th May, 2021. This follows REO UK having further expanded its choke manufacturing capabilities to produce electrical components that are more lightweight, thermally efficient and that provide lower losses.

Electrical, electronic and design engineers can register to attend the virtual event, which will continue to provide attendees with access to resources and recordings until June 30, via the EMC UK website.

Following a successful roll-out of the technology last year, REO UK has added additional edge winding capacity to manufacture components such as chokes and transformers. The technique produces components that are up to 10% lighter and with reduced power losses of up to 25% compared to existing products.

In addition, the single-layered structure of the edgewound coils allows for greater and more efficient dissipation of heat. This is especially helpful in applications that require water-cooling or that are expected to operate under high levels of mechanical and thermal stress, such as leakage transformers in the rail sector or chokes used in Electric Vehicles (EVs) - two markets that are expected to grow in the coming years.

“The relative order of magnitude (ROM) for an edge wound choke can be significantly less than its conventional counterpart,” explained Steve Hughes, Managing Director of REO UK. “It occupies less space using less material and is ideally suited to modern applications where the reduced losses and undesirable parasitic elements makes it much more suitable for use around Silicon Carbide (SiC) and Gallium Nitride (GaN) semiconductors, running at higher frequencies.”

Full information about the edge winding technique, as well as technical details about REO UK’s range of edge-wound chokes and transformers, will be available at the EMC&CI event on 19th-20th May.

EMC&CI is the UK’s only independent EMC show. May’s virtual event, which will supplement the next physical event in 2022, will be split into two sections: one section focussed on exhibitors such as REO UK, and another section featuring educational sessions and technical workshops tackling critical EMC and compliance topics.

Full information about the event, exhibitors and a full list of workshops is available on the EMC UK website. Design, electronics, test and electrical engineers, contractors, consultants and professionals can register for the event here.