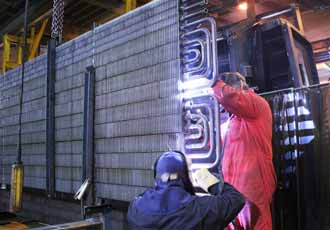 A bespoke economiser and heat exchanger are being supplied by A&J Fabtech to a new waste wood biomass power generation plant which, when built, will be the biggest such facility in the UK. Now under construction at the entrance to the Manchester Ship Canal at Ince Park in Cheshire, A&J Fabtech worked closely with the designers of the overall facility and delivered the economiser to site as one of the earliest stages of the project.

Once on-stream the biomass plant, which is expected to cost £100m to build, will produce over 42MWe of power and have a life expectancy of at least 20 years. It will burn nearly 200,000 tonnes of used but unrecyclable wood a year and power the equivalent of 40,000 homes, or the combined populations of major Cheshire towns Chester and Nantwich.

It will produce 65,000 tonnes of carbon dioxide less than an equivalent coal fired power station, which is comparable to taking 50,000 cars off the road.

Other benefits of the project include employment creation (initial construction and long term operational jobs, plus acting as the stimulus for the development of a wider economy), reduction in waste disposal requirements and general pollution, as well as environmental and biodiversity improvements.

The Ince Park economiser is to be built to a 140 tonne, three-part design and will be installed at the back of the main boiler, functioning to convert water to steam through a series of finned tubes. Its main purpose will be to recover heat that would otherwise be wasted so that it can be put to productive use.

A&J Fabtech is the UK’s largest manufacturer of bespoke economisers and heat exchangers. It can design and manufacture units for a wide variety of applications and duties, with experience working on projects as diverse as energy from waste sites like Ince Park, coal fired power stations, gas fired boilers and sludge incineration facilities. It has built units as big as 500MW and small enough to be packaged with standard boilers.

He continued: “The latter option is typically for larger units that have to be built up on site. The choice of heat recovery surface and materials of construction is always carefully selected to suit the fuel and operating environment of each project. This may be plain tube, cast iron, spiral fin, aluminium fin or welded gill.”

Typical materials of construction include carbon steels, alloys, ferritic and austenitic stainless steel. A&J Fabtech maintains a policy by which critical materials such as the base tube are only ever sourced from Western European suppliers, while all finning is carried out within the EU.

The development of the Ince Park area will also include a new port facility on the east bank of the Manchester Ship Canal and a new rail terminal. The 19-turbine, 50MW Frodsham wind farm is to be constructed alongside the biomass plant. Further, the nearby University of Chester’s Thornton Science Park is expected to also increase industry investment in the site and create high-skill employment opportunities.