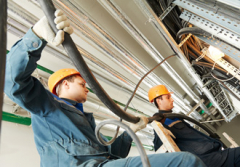 Keeping machinery operational is vital to maintaining productivity and being able to complete maintenance work during natural down-time, such as weekends, can make a significant difference. The installation of a new electrical supply for a food manufacturer on the Wirral, UK, needed to be completed quickly, so they called in Sulzer to get the job done.

Keeping food on the shelves means manufacturers and producers need to keep maintenance periods to a minimum. In some cases, it is necessary to complete repairs over the weekend to ensure full productivity during the week, especially when one of the busiest times of the year is approaching.

The family-run company supplies a variety of food products to customers across Europe. It prides itself on investing in equipment, systems and people to stay at the forefront of the business. Having recently invested in new equipment, the company needed to have the supply to a new distribution panel installed at the earliest opportunity.

However, the holiday period was rapidly approaching and the manufacturer of the electrical switchgear was unable to be on site until after the shutdown. This posed a considerable issue to the production manager, who needed the new distribution equipment to be in service as soon as possible.

Tobin Gardner, Area Sales Engineer for Sulzer, explained: “As an existing customer of the Sulzer service centre in Bromborough, the company contacted the local sales team to see if Sulzer could offer a faster turnaround. With engineers and facilities throughout the UK, we were able to complete the project a full week before the holidays began.”

Since the new distribution needed to be connected to the existing breaker panel, the main electrical supply for the building would have to be isolated before work could start. This made it necessary for the project to be completed over a weekend, to avoid any disruption to manufacturing.

The engineers, who are approved by the National Inspection Council for Electrical Installation Contracting (NICEIC) for both installation and testing, arrived on site on Saturday morning to begin the job. The new distribution would be protected by a 250A molded case circuit breaker (MCCB) and the 95 mm2 5-core Steel Wire Armored (SWA) cable had been supplied by the customer.

The Sulzer engineers were tasked with glanding and installing the cable to the distribution before isolating the main supply and terminating the cable into the MCCB. All of the cable lugs were installed using a hydraulic crimper to ensure the most reliable termination.

Once the cable had been installed, it was tested for insulation resistance to ensure no damage had occurred to the cable and that it would be safe to energise the circuit. With the distribution board live, the earth loop impedance tests and phase sequence tests could be completed, along with the installation certificate.

Gardner concluded: “The project was completed on Sunday morning and handed over to the production manager, who was very satisfied with both the speed with which the engineers had arrived on site and the quality of the workmanship. The rapid turn-around enabled the customer to get a head-start on organising the equipment that would be connected to the new distribution panel, all in time for production to start up as normal.”