Where are all the role models at?

Home > Women in Engineering > Where are all the role models at?
11th April 2019
Source: Electronic Specifier
Posted By : Anna Flockett 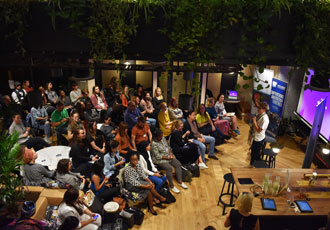 Cast your minds back to October, Startups Magazine hosted a 'Female Founders' event to celebrate women in tech, bringing together women and men from the industry to highlight female startups and female entrepreneurs in the industry. Two panel discussions were held and one thing that became apparently clear from the audience and the professionals on the panel, was the huge lack of role models in the technology industry as a whole and in particular, sources of female inspiration for young people.

I believe this is the same in engineering. The industry is a huge part of our economy and engineers are all around us. The unfortunate stereotype of an engineer is someone in a factory or site wearing a hard hat and a high-vis-vest, covered in grease and grim. However, the truth is that an engineer is an imaginative, innovative and practical worker who designs, produces and improves solutions and products in our everyday lives - from tiny circuit boards to huge components for the aerospace industry. With all these engineers surrounding us, it shouldn’t be hard to discover them and give them the championing they deserve.

All young people need inspiration in their lives - it’s great to have someone to look up to and inspire you. There are a multitude of prominent sports stars inspiring young women - Jessica Ennis-Hill, Serena Williams and Katie Taylor to name but a few. However, within science and engineering they seem to be lacking – the boys have Guy Martin, Tim Peake and Brian Cox, the girls don’t have anyone, but they are out there.

The WES organisation and website includes a number of lists that highlight a plethora of powerful females in the industry, and their stories, so you can discover more about them and how they got to where they are today.

There is even a paper published by Atkins back in 2013, ‘Britain’s got talented female engineering – Successful women in engineering: A careers research study’ which aims to encourage more women into engineering. A study was carried out in partnership with the Royal Academy of Engineering, Rolls-Royce and BP which included 300 female UK professional engineers, being asked what inspired them to choose a career path in engineering, their opinions on their choice and their reasoning behind it.

I’m not at all saying that having role models is the be-all-and-end-all to having a successful career, but I do genuinely believe you work better and can end up going further when you feel like you have help and support.

Yes, young people do get a huge amount of that, but sometimes when you have a true source of inspiration - and this could even be someone you know on a personal level, it could be your teacher, mentor, parent or sibling - it can spur you along, making you feel like someone is there with you every step of your personal journey.

So what can we do?
The first solution is to spread the word, to encourage more females into the industry, to celebrate the women that are successful in the industry and ensure women have equality.

We can also encourage more females within the industry to go into schools, to make themselves known, tell their stories, inspire young children – of both sexes - and to pass on what they have learned.

Starting at school level is important, as we also need to change the stereotypical idea of an ‘engineer’ being a middle-aged male figure. At schools we need to ensure there is a mix of both male and female role models to look up to, and to ensure that vocabulary is non-gender biased and girls are not deterred from ‘boys’ subjects’.

We need to expose the talent that is there in the industry, but fight for and maintain equality. Whether these characters be male or female, as much as we want to increase exposure for females in the industry, we want there to be a day where we don’t have to celebrate women in engineering, we just celebrate people.

What is being done currently?
Organisations are proving to be extremely supportive, for example WISE have a campaign ‘People Like Me’ which is there to support the recruitment of girls into STEM subjects post 16 years old, especially girls that typically haven’t chosen subjects such as physics and engineering.

On its website it has a role models section, of female trainers, entrepreneurs and workers that tell a little bit of their story and background. One of the girls featured on there is Esther Redpath who stated: “I get to meet a variety of people on a daily basis and learn new things from them everyday,” which proves the role models are out there - we might just need to be a little more proactive in finding them.

Another organisation, WES, who I previously mentioned, is regularly hosting evenings and events to celebrate women and show off the talent we do have in the industry.

The Institution of Engineering and Technology is another that is keen to encourage women to get their names out there to inspire others. For example, it has the IET women’s network, which is an online, global, professional networking community for women in STEM, which wants people to interact, share information and stories, share their knowledge and information, open doors for business and importantly build contacts and start making a name in the industry. Members can sign up to volunteer too.

The IET is sponsoring an upcoming event - an exhibition at the IET in London to celebrate and showcase women in STEM (science, technology, engineering and mathematics). The launch actually joins with another event, Ada Lovelace Day Live, which recognises the most inspirational women in STEM.

Ada Lovelace Day, which takes place annually, is a celebration of the achievements of women in STEM and aims to increase the profile of women in STEM and, in doing so, create new role models who will encourage generations of girls into careers and support women already working in STEM.

This year at the IET the exhibition will be showcasing the current winners and this year’s finalists of IET’s Young Woman Engineer of the Year (YWE) awards - yet another event that is bringing together inspirational powerful women in the industry, and all the young budding engineers that want to follow in their footsteps one day.

These awards are held every year to highlight the breadth of engineering in today’s society, across all genders - which is an important point to make. Even though some of these events and organisations aim to encourage more females into the industry, or to increase the number of inspiring female role models, nowhere does it say that men cannot join in and help spread the word. This is a fight that should include men too.

Therefore, I think the important message here isn’t just about women – it’s about having more people to look up, which should include a number of females. Most of the time we get through life and difficult situations with love and support from each other, so what better way to support someone than to inspire them. It’s all about celebrating each other.

Finally, to have more role models now for the younger generation to look up to will have a positive domino effect in the future. If we inspire young children now, they will one day go on and pass the torch to the next generation of engineers coming through - and so it goes on.

If you enjoyed this article why not try this one.

Want to read more about Women in Engineering? Check out this article here.

For further reading on this topic, here is another article.