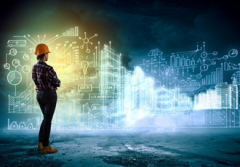 Alan Lusty, Founder and CEO of multi-disciplinary engineering business, adi Group, claims his industry must develop a laser sharp focus on inspiring a generation of female engineers, if it is to secure a sustainable workforce.

As his company marks International Women in Engineering Day on 23rd June, Lusty has argued that engineering needs to make a greater and ongoing commitment to attract females. Statistics show women make up only 12% of the engineering workforce, illustrating a significant gender imbalance in the profession that needs to be addressed.

“Gender inequality is one of the most pressing issues in engineering. Whether it is the result of myths and preconceptions about the job or simply a lack of knowledge on how to pursue a career in the industry, we must do more to inspire the next generation of female engineers,” he explained.

Lusty believes he and his teams have made some progress in building an organisation that women can aspire to work for and that sense is supported by a mention in the ‘Sunday Times Best Companies to Work For’ list for 2020. However, he argues that, for more headway to be made, the idea of female engineers needs to become normalised across society.

“We’ve heard about women with concerns about needing a thick skin to deal with sexist attitudes or even comments, and it is well-known that many females report feeling a greater need to prove themselves on-site.

“This is where the industry needs reform. There is absolutely no reason why a woman shouldn’t be an engineer and do just a good a job as a man. No one in this day and age should experience any kind of discrimination in the workplace.

adi Group has made some efforts in making engineering more accessible to young females with the launch of its pre-apprenticeship scheme in 2016.

The programme, run in partnership with North Bromsgrove High School in Birmingham, is designed to give 14-16 year olds the opportunity to gain hands-on mechanical and electrical engineering skills and experience in a real world working environment.

The course enables youngsters to complete GCSE modules and earn an EAL qualification, all while making significant progress through the NVQ Level 2 achievement taken by full-time apprentices.

Although Lusty thinks more needs to be done, the scheme has enjoyed some success in appealing to females, who have gone on to a full-time apprenticeship with the firm.

Abbie Beaver, for example, became the first full-time female trade apprentice taken on by the company in 2018, following her completion of the pre-apprenticeship course.

“Having been here over two years now and gone through the pre-apprentice scheme, I’m really enjoying my job. When I first joined, I had plans to get to grips with the working environment and pursue something I enjoy, which is exactly what has happened. I would definitely encourage other girls to consider going into engineering,” she said.

Lusty explained that encouraging female engineers isn’t just a tick box exercise to fill a diversity quota. Rather, he believes it is a pre-requisite of any sustainable future for UK engineering.

“The discourse around sustainability is too narrowly focused on climate change, so we have been advocates of widening the conversation, assisting the communities that sustain our businesses and provide us with the skilled and productive employees we all need. Females play an important role in shaping all of those areas.”

“The engineering skills gap is another pressing concern for the industry and, as the need to bridge it becomes more urgent, we really are missing a trick, if we don’t do everything we can to appeal to half our audience of young people.

“So, now is the time to reassess our efforts, particularly those aimed at encouraging young female minds into engineering. This is not only key for a more sustainable future, but women will bring with them new perspectives, ideas and skillsets that can drive innovation and take the industry to new heights.

“No matter the efforts we make to fill the skills gap, we are doing females a disservice, if we do not address their lack of enthusiasm for engineering. Engineering offers high skill, high pay jobs and women can build great careers. And, ultimately, we are missing out on half of the talent pool,” he explained.

“We truly believe in the value of young minds and, in particular, the contribution females can make to our industry. We will continue to dedicate time and resources to inspiring young females, breaking down barriers and doing our bit to deal with the engineering skills gap.

“And we would urge our industry peers to do the same. Engineering has a lot to give young women and all the evidence I’ve seen tells me they have an enormous amount to give engineering.”