Encouraging the next generation to consider STEM careers

Home > Women in Engineering > Encouraging the next generation to consider STEM careers
30th June 2020
Source: I AM SCIENTIST
Posted By : Lanna Cooper 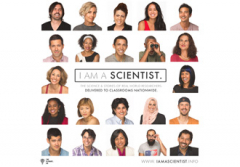 Science has been the driving force in the modernisation of the world as we know it, yet science as an industry has failed to adequately diversify with the times. While the new digital age offers opportunities to expand interest in and appeal of STEM careers, many barriers still hinder equitable access for all students.

Introducing the 'I Am A Scientist' initiative, which provides opportunities for students, specifically those in Junior High School and High School, to interact with the science and stories of today’s scientists - breaking down barriers like race, gender, and personal interests.

The program’s collection of classroom toolkits provide real life stories of modern scientists, classroom resources, posters , career resources, and more. The initiative aims to help students engage with scientists that may look, act, or think like them, and are making great strides in remarkable fields that are often left out of career planning discussions.

With featured scientists that range from multidimensional graduate students to globally recognised innovators at the top of their field, 'I Am A Scientist' tunes into the power that comes from discovering a wide range of role models.

'I Am A Scientist' is designed to encourage the next generation of leaders with various interests and backgrounds to consider and explore STEM (Science, Technology, Engineering & Math) careers. The goal is to ensure that every student feels inspired by seeing the relatable individuals behind scientific innovation while enabling teachers to change the narrative about what science is and who can do it.

The idea is simple: to ensure that every student has the opportunity to see themselves in science, and ultimately learns how to pursue a journey of their own.

In 2016, Dr. Nabiha Saklayen wrote a blog post about being a physicist who didn’t fit into society’s dated ideas of what a physicist looks like. The blog post became the catalyst for creating the initiative with her longtime friend, Stephanie Fine Sasse, a multi-disciplinary designer and curator whose work unites social impact, science, technology, play, and the arts.

In sharing their stories with each other, the women found that they had faced many similar challenges, despite coming from different fields and backgrounds, in their pursuits of scientific passions. Their commitment to reducing the barriers for future generations combined with their belief that STEM benefits from diversity birthed the 'I Am A Scientist' initiative.

“In our own ways, neither of us had ever fit the outdated, but prevalent stereotype about how a scientist looks, acts or thinks. I am a young woman of color who loves painting, K-pop, and yoga, and I’m also a dedicated physicist and passionate inventor. I want to be all of those things because it makes me stronger as a scientist and leader,” remarked Dr. Nabiha Saklayen, PhD, Co-Creator & Advisor, I AM A SCIENTIST.

“I’m a designer with a love of dance and a half sleeve of tattoos. I also spent the better part of a decade studying the human mind and brain,” described Stephanie Fine Sasse, EdM, Co-Creator & Director, I AM A SCIENTIST and Founder of The Plenary, Co.

“We shared experiences of feeling out-of-place, dismissed, underestimated, and underrepresented in our fields. We acknowledged the severe lack of multidimensional scientists in pop culture and textbooks. And I remembered what it was like to be a kid who loved space, dinosaurs, and rocks, but never considered the realities of a career in science. Nabiha and I decided to do something about it.”

From healthcare to transportation to entertainment, STEM fields are transforming the world as we know it. That makes it particularly important for next-generation leaders to be representative of society. While this hasn’t always been the case, 'I Am Scientist' hopes to provide a gateway for students to access the resources that they need to pursue a STEM career. Relatability opens the door for younger generations to explore careers they may not have known existed, creating a window of opportunity that could change the world.

'I Am A Scientist' is powered by The Plenary, Co., a 501(c)3 educational nonprofit committed to making important ideas more accessible through art, science, and play.

More from I AM SCIENTIST