We need to get rid of the bad stigma around apprenticeships

Home > Women in Engineering > We need to get rid of the bad stigma around apprenticeships
22nd July 2019
Source: Electronic Specifier
Posted By : Anna Flockett 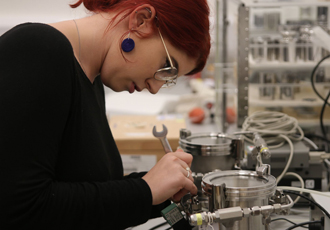 As this year’s International Women in Engineering Day took a focus on apprenticeships, there was no surprise that Perdi Williams, Assistant Research Scientist at the National Physical Laboratory (NPL) was announced as one of WES’s (Women Engineering Society) Top 50 Women in Engineering. When I spoke to Williams and congratulated her, her response was: “It is a bit overwhelming, but so very exciting, I keep thinking did you get this right?”

The NPL journey
Having worked at NPL for a total of four years, including during her apprenticeship, Williams only has positive memories and experiences. “The National Physical Laboratory are really good when it comes to gender equality, and on my cohort there was six girls and only one guy. It wasn’t exactly the typical experience you get in engineering.”

Starting at the NPL was such a change for Williams: “I came straight from education and the only experience I’d had of working was as a receptionist in my local doctor’s surgery after school.”

However, she explained that she loved the new found responsibly the apprenticeship gave her, as it taught her skills such as presenting, meeting new people and organisation. “When I started, just sending and receiving emails terrified me, but the NPL offers soft skills training and that helped me so much.”

What is your opinion on apprenticeships?
Williams explained that, in her opinion, not enough students are informed about apprenticeships. She started hers straight from school, after changing her mind about college as she wasn’t entirely sure what subjects to follow. “I didn’t particularly get on well with science at school, but my physics teacher helped me out a lot. I always had a lot of questions, and they would stay behind to answer all of them.”

Resistant materials was Williams favourite subject: “I have always been really hands on, and really enjoyed building speakers and things like that.” So finding an apprenticeship was possibly the best outcome for Williams. She explained: “I started at 16 and didn’t know much at all, now I have moulded into the exact worker that NPL were looking for, it works in both our favours.

“I think apprenticeships are fabulous. It brings a new way of thinking to the company and it’s always useful having new ideas around the table, as students come as a blank canvas, so the company can paint them the way they want.”

There is a really bad stigma around apprenticeships, as the perception is that they are just for dumb people, as Williams expressed: “They couldn’t be anymore wrong, my apprenticeship has taught me so much – a crazy amount, and it gives you a hands on experience.”

Have you ever felt you have been treated differently due to your sex?
Williams answered: “I applied to a couple of apprentice schemes before I got accepted by the NPL, and I have had people, not in the NPL, say to me “you don’t have the right look for an engineer”, or “why don’t you try an apprenticeship in hair and beauty.”’

Occasionally Williams will go to an event full of men that want to just talk amongst themselves. “I went to an event where I was the expert there, but people still went to speak to men first.”

She doesn’t take it personally, and it isn’t a personal attack, but we have to break these stereotypes so people don’t naturally think that way.

Williams expressed: “We want equality and so we need to make things more accessible for women. People feel most comfortable around people like themselves, so by getting more women in the industry it will naturally attract others. For example, going to a job interview, females will feel more at ease if there is a woman on the panel.”

What do we need to do to encourage more girls into engineering?
Giving teachers and parents the right tools to inspire people. “I could be the most inspiring person in the world, but I’m only spending an hour with these people if I come and give talks, so there is only so much I can do in that time. So the main priority should be to give schools, parents and teachers the tools to ensure they can be as encouraging as possible,” Williams expressed.

Changing the vocabulary we use, Williams explained: “I am guilty of it myself so I don’t think it’s necessarily done on purpose, because by saying ‘oh aren’t you such a little cutie – you’re going to be such a smart girl’ you can change the ideology.”

“Just be as encouraging as possible, but there are obviously somethings you cannot do, mainly for safety reasons, so we don’t want teachers and parents to say you can do EVERYTHING,” Williams laughed, it is about giving young girls the tools and having more women engineers visible for them to see.

Williams said: “It’s not particularly helpful that when you Google engineer, you come across a lot of men in hard hats and high-vis jackets. The majority of the time engineers are not onsite and dressed like this – yes that is an important part of it, but we need to show how varied engineering is, as it’s quite a closed off industry. Yes, sometimes it does have to be, but showing people what it’s like is important.

“When I was younger I was convinced I was going to be a forensic scientist, just running around solving crimes left, right and centre. Now I have a friend who is a forensic scientist and I have realised it is completely not for me. It’s about making engineering more open and giving people the chance to experience it.”

Williams explained that although it is not where she imaged herself, she absolutely loves it and wouldn’t change a thing. “I love that I am responsible for something that can help change lives. I look and I think, I can make a difference, and that is such an amazing feeling.”

The reality of engineering isn’t how a lot of people perceive it and, Williams explained that every day is completely varied. “From site visits, to lab days, to conferences, to meeting people, it’s so varied and this stops you from falling into a slump. I like building stuff, so I get to do that a lot, but you wouldn’t want to do the same thing every day.”

Not a blame game
The lack of women in the industry isn’t particularly a subject that people like to talk about, but it is something that needs addressing by everyone. Williams said: “I assume from a man’s perspective there is a bit of a blame game going on, but there shouldn’t be as it’s no one’s fault, so we just need to openly talk about it more.”

She continued: “We shouldn’t be blaming anyone, it’s a case of everyone holding their hands up and saying, yes okay for whatever reason it has happened, but we need to pull together and fix it.”

Do you have any advice for young girls?
Everyone is different, and some things are right for some people and not others, that’s what you have to remember when it comes to apprenticeships – some people are made for the university route, some people are better suited to being an apprentice.

She said: “But you do need to give everything a go, just try it. Have a look around in the engineering industry as there are hundreds and thousands of roles. If you like engineering and science, there are so many roles associated with it.”

Williams emphasised that it is very important to have everyone involved, and build a community. She explained: “There are so many routes into the industry, and there is no right or wrong answer, and there isn’t anything you’ll regret – other than not trying things. Don’t be scared just go for it!”

When discussing what is next in store for Williams she stated: “I’m going to keep doing what I’m doing, which is making a difference. There is so much more for me to learn and that I want to learn. My options are open, I could always go and study at university, there is always that option. But at the moment I am just enjoying working – I’m very lucky that I love my job.”