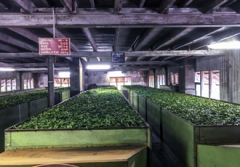 Nearly 50% of energy consumption in Sri Lanka’s tea manufacturing is through the withering process - the method used for drying tea leaves. The costs of this process have been almost halved in many cases, along with the industry’s impact on the environment, thanks to the use of Invertek Drives Optidrive Eco VFD (Variable Frequency Drive) technology.

In 2018 hundreds of Invertek’s Optidrive Eco drives were installed and commissioned in many tea plantations throughout the country as part of NAMA, a project, led by the Sri Lanka Sustainable Energy Authority, under the direction of the Ministry of Power and Renewable Energy, and the United Nations Development Programme, to reduce greenhouse gas emissions through greater efficiencies.

Tea withering uses fans to remove moisture from the black tea leaves, drying them up to 40 or 50% during a 12 to 18-hour period.

Previously, fans would run at a constant speed blowing air through dampers to dry the leaves. The dampers would be manually controlled to adjust the airflow. The introduction of the drives meant the airflow could be controlled more accurately and efficiently by varying the fan speed rather than adjusting the dampers. This considerably reduced energy usage.

“Quality of the produced tea will mainly depend on the withering process. Withering troughs use DOL or Star/Delta Starters to start its fan and use dampers to control the air flow to obtain the withering of tea leaf in the existing system,” said Anushka Chandrasoma, Assistant Manager, Hayleys Aventura Pvt. Ltd.

“While replacing the traditional starter with VFDs, operators can control the airflow by reducing the fan speed through a VFD, which enables savings of around 20-25% of the energy used in the withering process. We used Optidrive Eco VFD’s with IP66 enclosures, which have the maximum protection against the dust and the water.”

Tea manufacturers have said the introduction of the VFDs has not only reduced energy costs but increased the quality of the tea leaves. VFDs are also being introduced to other parts of the tea manufacturing process, including controlling furnaces and the amount of energy they produce. Tea manufacturing is one of Sri Lanka’s main industries and is the fourth largest tea producing nation in the world.

Dylan Davies, Invertek’s Product Manager, said the Optidrive Eco range was perfect for the tea project because of its ability to control motors efficiently.

“The Optidrive Eco’s advanced onboard features also mean there is no need for peripheral equipment, reducing costs and the need for additional space. It also provides intelligent maintenance interval timing that allows maintenance reminders, reducing the need for costly downtime in production,” said Davies.

“With its motor current monitoring function, it also means that any faults in the motors are identified early, again reducing any potential down time that could affect the aeration of the tea leaves.”

With the Eco’s built-in keypad and OLED text display, commissioning takes just minutes, and ongoing operation is easily managed. It can also be used with Invertek’s new OptiStick Smart that allows Bluetooth access through the OptiTools studio software or OptiTools Mobile phone app.