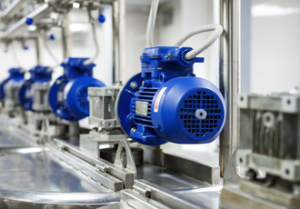 Global manufacturer of motors and drives, WEG has published an infographic detailing the changes of the new motor legislation in Europe 2019/1781, which will take effect from 1st July. The infographic ensure engineers understand the new energy efficiency requirements for low voltage motors, which could provide significant financial gain.

Europe has over 8 billion electric motors in use, consuming approximately 63% of the electricity generated across the continent. Until recently, some of these motors, including those designed for hazardous areas, were exempt from energy efficiency regulations. However, these regulations are about to change.

Now, the European Commission’s (EC) ecodesign committee has approved a new, stricter version of the ecodesign requirements. The latest changes to regulation will include a wider scope of motors, and for the first time, variable speed drives are included to achieve a higher efficiency standard.

“WEG’s motors meet the new energy efficiency standards - and have done long before these regulatory changes were announced,” explained Marek Lukaszczyk, European & Middle East marketing manager at WEG. “But, with no obligation to implement high levels of energy efficiency in hazardous environments, some businesses opted for low efficiency motors.”

Previously, the scope of the regulations only covered 3-phase motors ranging from 0.75 to 375kW, leaving motors outside this power range excluded. From 2021, the impending regulation requires all new 2-, 4-, 6- and 8-pole motors in the power range of 0.75-1000kW to meet IE3 efficiency class - used for motors with premium levels of efficiency. The previous legislation allowed for an IE2 motor to be used provided it was controlled by a VSD, but now sizes from 0.12-0.75kW will need to meet IE2 class.

Special purpose motors, such as explosion-proof or flame-proof motors were exempt from the previous regulation, out of precaution for the higher-risk environments they were used in. From July 2021, new ATEX motors entering the supply chain must be rated IE3 or higher with increased safety motors Ex eb being the exception. These motors will need to be at least IE2 efficiency level by 2023.

“The electric motor market is rapidly reflecting the shift in regulation and transitioned to more efficient motors,” added Lukaszczyk. “The WEG range of IE3 Hazardous area motors are manufactured to IEC standards and has a super-premium range of safe area and hazardous area IE4 motors. This will prove useful as from 2023, safe area motors between 75kW and 200kW that are not brake motors or hazardous area motors will be required to meet efficiency class IE4.”