Compact scanner fits into tight spaces on AGVs and forklifts 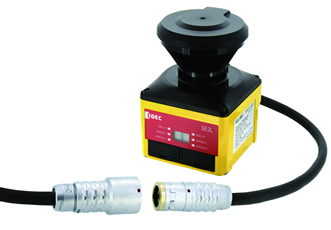 Introducing the SE2L Safety Laser Scanner, IDEC Corporation has created the worlds smallest, and the world’s first with master/slave functionality and dual protection zones. A laser scanner is a safety device that uses the reflection of laser beams to detect the presence of objects or people. The scanner is certified for use in safety applications including AGVs, forklifts, robots and other items of moving equipment found in industrial facilities.

Dual zone protection allows one SE2L scanner to scan two adjacent zones simultaneously and independently, performing the work of two scanners for the cost of one. A common application is providing dual light curtain protection for two robots mounted side by side. In many applications, dual zone protection cuts costs in half.

The software provides drop-and-drag functionality to configure the protection area into any pattern within its 270° arc of protection. The teach mode scans obstructions in its standard 270° arc of protection to produce a pattern. Up to 32 patterns can be stored in the scanner, and different patterns can be selected and applied on the fly by sending commands to the scanner through the Ethernet port, or by configuring the encoder input to react to changes in speed.

A common application for multiple patterns is with an AGV or forklift. A large pattern is used when the equipment is moving at top speed, with smaller patterns used as the equipment slows down. This allows plants to keep safe working distances and reaction times, while still maintaining operating efficiencies.

The scanner communicates intrusion alerts to a safety controller via four PNP OSSD safety outputs and two PNP non-safety outputs. The OSSD outputs have a self-diagnostics function that tests the signal periodically to detect malfunction. The safety outputs are commonly used to indicate detection closest to the scanner in the Protection Zone and Warning Zone 1, while the non-safety outputs are commonly used to indicate detection in Warning Zone 2. Two other outputs can be used to request muting. The scanner can also communicate with a safety or other controller via its Ethernet 100BaseTX waterproof connection port.

The scanner is certified for use in Safety Category 3, Performance Level d (PLd), Safety Integrity Level 2 (SIL2) applications. It is housed in an IP65 enclosure. In addition to performing its certified safety functions, the scanner can also be used to make highly accurate distance measurements, communicating this information through its Ethernet port to a controller or a PC. It can also be used to measure speed through its incremental encoder input which measures pulses. This function can be used to switch patterns as the speed of a moving item of equipment changes.

Laser beam detection characteristics are 30ms/rotation with one laser beam per 0.125º. There are 2,000 laser beams per rotation through the 270º arc, with an 11mm gap between laser beams at 5m. The minimum detectable size at 30mm at 1.8m, 50mm at 3m, and 70 mm at 5m. The scanner includes both muting and EDM functionality to ensure maximum flexibility and safety.