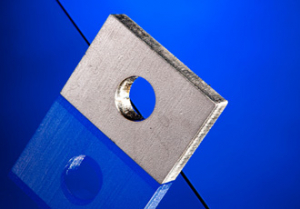 Having invested in laser equipment that would allow faster production turnaround, 24-hour operation, and a variable system for future capacity, Oldham-based Laser cutter, ABi Laser found that the equipment’s full potential was hampered by the supply, specification, and costs of delivered nitrogen, which is essential for the process.

The situation was remedied when increased productivity, continuity of supply, and substantial cost savings were achieved by the installation of an Atlas Copco on-site, nitrogen generation skid package.

Laser-cutting metal relies on a continuous supply of nitrogen gas as a blanket to prevent burning during the process. Purity of the gas is an important factor in overcoming the tendency for discolouration of laser-cut edges and to provide a high quality finish. As well as these critical process requirements, it was important for ABi’s production management to achieve savings on the cost of delivered bottled nitrogen supplies.

As ABi’s Managing Director, Arran Reader explained: “We made a major capital investment in order to increase output and cut a wider range of metals, including 25mm mild steel, stainless steel and aluminium. The installation of an Amada 6Kw Ensis laser, together with an ASF EU pallet loader, meant we could offer our services at a more competitive price as we could run throughout the day with minimum manpower and also operate ‘lights out’ as well.”

After investigating all the available options to overcome these problems, Arran Reader decided that installing on-site nitrogen generation was the answer. It would deliver significant cost savings, maintain supply independence, and ensure a continuous, reliable source of high purity nitrogen.

Atlas Copco provided the solution by installing an all-in-one nitrogen generation assembly HPN2 Skid 7 on a trial basis which provided adequate proof for Arran Reader that this was the route to follow. The trial also helped to establish the appropriate nitrogen purity level for ABi’s application. This is an area where advice and technical support from the on-site generation system manufacturer is essential, a service that is sometimes lacking from gas-only suppliers.

The compact skid package came complete with a GA VSD+ FF full-feature, rotary screw compressor, an NGP+ nitrogen generator, air and nitrogen receivers, plus a booster, dryers, and filters, all fully integrated into one pre-commissioned unit. Pennine Pneumatic Services, Atlas Copco’s local premier distributor who carried out the installation, ensured there was minimum risk of pressure drop in the system by linking the unit to the production area with a full AIRnet modular alloy pipework system.

For ABi’s application, the unit had to be disassembled to allow access for its installation into a designated location but, once in place and fully operational, the trial confirmed the need for bulk nitrogen deliveries could be eliminated and there would be corresponding savings. The installation was flexible enough to allow for downsizing the system in case of fluctuating demand.

The delivery rate of 99.99% purity nitrogen generation from the unit was established as 19 Nm3/hr at 300 bar(g) to charge the onboard 16 bottle manifold cylinder pack (MCP) thereby producing 408 Nm3 over a 12-hour period. When running flat out, that equates to 57 MCPs a month, 30% more in comparison to the nearest competitive offering that was limited to a maximum output of 44 MCPs.

Furthermore, the Atlas Copco unit’s energy-efficient components, which include a VSD+ permanent motor drive and NGP+ generator, can offer more than 50% cost savings in comparison to conventional on-site generation solutions. The average cost of ABi’s high pressure nitrogen supply now produced on site by the HPN2 skid is £0.09 per m3. That is in stark contrast to the previous figure of £0.68 per m3 for delivered gas, with the added benefit of even bigger savings as production expands.

The nitrogen generator operates with Pressure Swing Adsorption (PSA). The system works by separating nitrogen and oxygen molecules within the compressed air stream feeding the unit. PSA does this by trapping the oxygen using adsorption techniques. Adsorption takes place when oxygen molecules attach to a Carbon Molecular Sieve (CMS) allowing the smaller nitrogen molecules to pass through.

The NGP+ generator’s low-volume, high quality absorbent medium provides optimum capacity to produce the nitrogen. Whereas other competitive systems require six volumes of air to produce one volume of nitrogen, Atlas Copco’s generator design requires a ratio of only four parts of air to one part of nitrogen.

As an additional bonus the new facility enables ABi Laser to save on energy costs of other operations that can now utilise the unlimited on-site nitrogen supply. In addition to its mainstream metal cutting activity, the company employs lasers for tube cutting and engraving, as part of its other metal fabrication services such as folding, tapping and plasma.

Abi’s tangible savings from eliminating the expense of delivered supplies contributes to reduction in the total cost of ownership. This in turn ensures an early payback on the company’s capital investment and an estimated ROI within 2-3 years.

Commenting on the success of the nitrogen project, Arran Reader said: “We are impressed with the performance of the system and the organisation and professionalism of Atlas Copco at all stages from the initial trial to final commissioning. We are saving on the cost of nitrogen, saving on energy consumption, and now have more capacity and a variable system for future developments.”