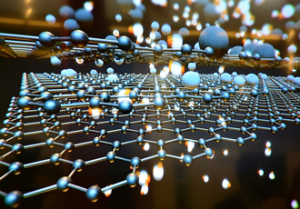 Cheese, bacon, tomatoes and peanut butter - weird and wonderful burger toppings are all the rage, but some combinations are more appealing than others.  Layering several elements can be a formula for magic, and the same is true for nanomaterials. Here, Mar Garcia Hernandez, work package leader at the Graphene Flagship explains the potential of experimenting with Graphene and Related Materials (GRMs).

Before realising the potential of Graphene and Related Materials (GRMs), the term was used to describe single layer nanomaterials that could be integrated with graphene.

Graphene describes a single monolayer of graphite. Tightly bound in a hexagonal honeycomb structure, these carbon layers are just one atom in height. This means you’ll need to stack three million layers to create graphene just a single millimetre thick.

Hailed as the first ever two-dimensional crystal, graphene is noted as a super-material because of its unrivalled strength, conductivity and light weight. Since its isolation in 2004, a discovery which achieved the Nobel Prize for Physics, the nanomaterial has made headlines, but it isn’t the only single layer material with exceptional properties.

Graphene’s isolation paved the way for a new class of crystals to be discovered, all of which are one atom thick. In fact, researchers at the Graphene Flagship have now identified between 2,000 and 5,000 new materials that can be exfoliated to a single monolayer. While these GRMs may not boast the exact properties of graphene, combining these materials has the potential to change the world.

Due to their atom-scale structure, GRMs can be shuffled with each other to engineer new materials on demand. The integration of GRMs in perovskite solar cells are a good example of this.

Perovskite cells, a material increasingly used in solar panels, are most effective for power generation when used in small areas. However, large scale perovskite operations have difficultly consistently depositing solar cell layers, leading to reduced energy generation and difficulties scaling up this technology.

Introducing these GRMs enabled record-breaking renewable power generation for the cells, achieving a 12.6% conversion rate. While the process of integrating these materials is incredibly complex, it’s easy to understand how the results could impact our day-to-day lives.

Layering is a more complex process than it may appear, however. Scientists are experimenting with different parameters while piling up layers. Among them, the angle conformed between the atomic arrangements of the various layers is of paramount importance to set the materials’ properties. This follows a discovery made in 2018, which identified that graphene could become a non-resistive superconductor when successfully twisted at a 1.1-degree angle.

When attempting the experiment, scientists discovered that the smallest error in alignment could give entirely different results. For GRMs, this means that twisting each atom layer has the potential to open the floodgates for a huge number of new materials.

Graphene Flagship research has already identified numerous possibilities for GRM structures and manipulations, the results of which are already playing functional roles in industrial applications.

So, while burgers topped with peanut butter aren’t going to change the world, these examples demonstrate that the practice of layering GRMs could.