It's plastic and it's fantastic! 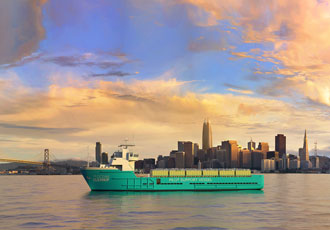 You know that material plastic? It’s fantastic… in terms of design that is. It is cheap, durable and light - it is the doyen of packaging, the king of all our white goods and the magic ingredient in everything from shampoo to cosmetics.

But, as we send more and more plastic to landfill and into our oceans, it is becoming ubiquitous with our environment. Our food chain is now contaminated with it. Plastic particles have been found in a third of fish caught off the British coast (83% in UK-caught scampi), while tiny particles are now present in our sea salt. The latest report by the Ellen MacArthur Foundation said that if we don’t do something soon, by 2050, there will be more plastic in our oceans than fish.

The most common contaminators are microfibers and one-use plastic bottles, of which a staggering one million are bought every minute around the world.

With plastics production expected to double in the next 20 years, how can we create a new plastic economy that won’t leave our planet littered with non-biodegradable coffee cups, shampoo bottles and discarded fishing nets?

Cyrill Gutsch, a former designer and founder of environmental organisation Parley for The Oceans, said while a massive detox is required, it’s not going to happen overnight. Speaking to online design magazine Dezeen, Gutsch said: “We are drug addicts. We can’t go clean and sober overnight. Recycled plastic is the substitute drug.” 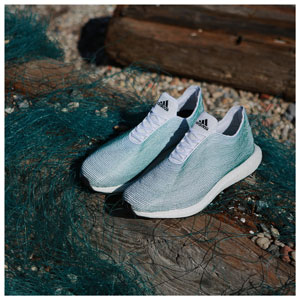 Currently only 14% of plastic packaging is recycled. A figure that the Ellen MacArthur Foundation said could be raised to 70% with concerted industry effort to achieve a more circular design economy.

And the big companies are starting to act. Proctor & Gamble recently announced a limited run of its Head & Shoulders shampoo bottles made from post-consumer recycled (PCR) beach plastic collected from French beaches. IKEA launched its first kitchen range ‘Kungsbacka’ made from recycled PET-bottles, while designers Adidas and Stella McCartney used Gutsch’s Parley Ocean Plastic in their trainers. Made using the German sports brand’s existing manufacturing process, the yarns in their shoe uppers are replaced using fibres from recycled waste plastic.

Anna Granath, product developer at IKEA, said about 25 half-litre PET-bottles are used to create a plastic foil that coats the reclaimed wood kitchen fronts creating a sustainable kitchen. She said: “What we do at IKEA has a big impact on the environment due to the large quantities we produce, so by using recycled materials, we can create products which are more environmentally-friendly and sustainable.

“We are looking into new ways to re-use materials such as paper, fibre, foam and plastic so that we can give them a second life in a new product.”

Proctor & Gamble’s technical breakthrough came via a partnership with recycling business TerraCycle and waste management firm SUEZ when they were able to turn 2,600 tonnes of PCR into a technically viable material that could be used in shampoo bottles on a larger scale. The company now wants to double the amount of PCR used in its packaging by 2020, announcing that more than half-a-billion bottles in Europe will contain 25% of PCR plastics by 2018.

However, one of the biggest issues for designers wanting to use recycled plastics is the challenge in making sure the recycled material has the correct characteristics for mass production.

Keith Smith, Technical Director for SOLIDWORKS reseller NT CADCAM, said: “Before an injection moulding tool is made, designers need to know that the recycled plastic material they want to use is fit for purpose. A CAD software such as SOLIDWORKS has a massive database of different materials, both recycled and virgin plastics, which designers and engineers can test for manufacturing defects.

“You need to be able to simulate the flow of recycled plastic in a molten state going into the moulds and be able to see where the shrinkage or sinks are when they cool. Only then, can you design out any faults before going ahead to make an expensive tool.

“More crucially with a product like SOLIDWORKS Plastics, you can test recycled plastics for material characteristics to check for brittleness once cooled.”

One of the biggest issues with waste plastic in our oceans is collecting it before it breaks up into dangerous microplastics. According to The Ocean Cleanup, a Dutch tech company that is developing technologies to extract plastic from our oceans, we need to remove the plastic debris while it is still large. Boyen Slat, who founded the company, said: “Over time, sunshine can make the plastic become very brittle and that’s when it starts to break up into tiny pieces, which are then consumed by marine life.”

To collect all these pieces of plastic from 1cm bits up to tens of metres of discarded fishing nets, Slat has designed a floating filtration system suspended in the ocean using SOLIDWORKS 3D CAD.  Speaking at the system launch he said: “The Ocean Cleanup lets the plastic come to us. By using the natural ocean currents to our advantage, we can help the ocean clean itself using a network of floating screens, which will concentrate the plastic so that we can collect and ship it to land for recycling.”

Slat says the only way to pave the road towards a plastic free ocean in 2050, is by combining source reduction on land with The Ocean Cleanup, which is set to go live in the North Pacific in 2018 and aims to remove half of the debris over five years.

As businesses realise that mainstream technology is there to give them a choice in what recycled plastic materials they can use in design, the better the chance we have in preventing more virgin plastic reaching our oceans.