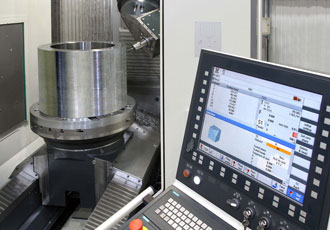 Transforming efficiency and repeatability, two Heller 5-axis machining centres have been installed, on with turning capability. This mainly benefits the way marine components are machined at an offshore equipment manufacturer and refurbishment centre in the UK. Previously, the process for machining cast steel components was labour intensive, involving highly skilled machinists setting up each part 16 times on manual mills, drilling machines and lathes.

Lead-time from customer order to delivery was 24 weeks, partly because machining took a 40-hour man week typically spread over a month. Assembly, test, finishing and customer factory acceptance were also protracted in the manufacture and installation of the device.

The whole process has been reduced from 24 to just six weeks, as the parts can now be milled and drilled efficiently in one hit on both Heller 5-axis machining centres and turned as well in the case of the second machine. Within the family of six sizes of component, one variant for example now takes just nine hours to mill and drill and requires a further one hour for turning operations.

Investment in the Heller machines was triggered by the manufacturer's need for more process control over production of the components, as volumes were rising and there was increasing requirement for better consistency. The first Heller 5-axis machine immediately provided the required repeatability, as well as drastically reducing lead-times and eliminating freehand fettling using angle grinders.

The machine, designated FP 4000, completes all prismatic metalcutting on the casting in 3+2-axis mode. Turning is performed on a separate lathe. The second Heller machine is a CT 4000 model with an integrated, 1,000 rpm turning table, so all operations are carried out in one clamping.

Similar benefits are achieved when machining another key component, this time of stainless steel. Each is milled and drilled to within 20µ dimensional tolerance in a 15-minute cycle on the Heller 5-axis production centres. It takes much longer to machine them manually and there was a considerable amount of hand grinding involved to ensure an accurate fit. Now, two sets of eight parts can be taken at random after machining and assembly staff know that they will fit together perfectly.

Multiple benefits from 5-axis machining
In the past, accuracy during conventional production of these components was assured due to the skill of the manufacturer's apprentice-trained operators and extensive fettling of the parts by hand grinding. The latter job is unpopular with the workforce, however, and has health and safety implications due to the risk of white finger and dust generated within the factory. Ingenious use of milling cutters mounted in angle heads, a technique suggested by Heller's applications engineers, allows the same job to be done automatically as part of the CNC cycle and has eliminated manual fettling.

Another advantage of using Heller 5-axis machining centres is the ability to combine the use of the manufacturer's CADCAM systems to redesign existing products to reduce their weight and then create programs to produce them. The company knows that complex features that may be introduced when altering the design of a product will be machinable on the Heller FP 4000 and CT 4000, whereas manual machine tools would not be sufficiently capable. Similarly, the CADCAM / 5-axis route has streamlined the design of new products.

Now that the manufacturing process is highly or fully automated, it is possible to run the two Heller machines manned for two shifts and then unattended for most of a third, maximising productivity. Comprehensive safety during lights-out running is provided by power monitoring and tool breakage sensing. On the basis of virtually 24-hour working, both machines paid for themselves within two and a half years of installation.

Purchasing decision
Four alternative proposals from different suppliers were considered before opting for the Heller solution. One possibility was to install a 5-axis machine fitted with a rotary table on a swivelling trunnion. The problem with this type of machine is that the Z-axis stroke is too limited to allow deep holes to be drilled in the top of the casting, unless an unduly large and costly machine had been purchased.

The other two suppliers suggested production routes involving multiple machines: either horizontal- and vertical-spindle machining centres and a CNC lathe; or a horizontal machining centre with a large rotary indexer and a vertical turning lathe. The latter set-up suffered from long tool change times and was expensive, while both configurations would have taken up a lot of space on the factory floor.

The Heller FP / CT 4000 machines offer large machining capacity of 800x800x1,000mm in a compact footprint, with positional feedback via linear scales. The rotary table provides the fourth CNC axis and a 15 to -195° swivelling spindle head mounted at 45° provides the fifth CNC axis in a compact configuration that does not squander Z-axis movement. Control is by the Sinumerik 840D sl from Siemens.

As part of its turnkey engineering service to the customer, Heller provided and simulated the initial program and proposed a comprehensive tooling package comprising HSK-A63 toolholders, indexable-insert cutters and solid carbide mills and drills.