3D paves the way to a safer plant 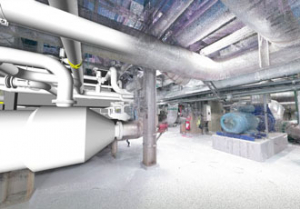 Umeå Energi can now focus on the critical points in the pipe system at the heating plant in Ålidhem, Sweden. FVB has conducted 3D scanning, 3D modelling, and expansion calculation at the plant to get the facts. “We’ll now have a better and safer plant,” said Konny Lindberg, who is in charge of plant development at Ålidhem’s heating plant.

As a plant owner, you have to keep track of the service life of various parts of the heating plant. Since 31st December, 2019, it has been a requirement that all companies with Class A and Class B pressurised devices must keep service life records describing the plant’s remaining service life. Pressurised devices include everything from large boilers to heat exchangers, small containers, and pipelines.

The requirement for service life records is essentially a work environment issue, because if certain equipment is not safe during its entire estimated service life, the risk of accidents increases. However, the task of producing a service life record is not always simple, as it may involve older plants where there is a lack of documentation.

This was precisely the case for Umeå Energi and Ålidhem’s heating plant, which was built from the late 1960s to the late 1980s. The plant contains two biofuel boilers, three oil boilers, and an electric boiler that produce a total of about 200 MW. The plant was previously a main production plant but is now primarily used as a peak load plant.

“As part of assessing where we are in the life cycle of the plant, there was a need to scan our hot water system and waste burning furnace, especially considering that we have no blueprints. Using a 3D model, we were able to analyse critical pipelines such as the district heating lines, as well as primary and secondary lines around the boilers, in the first phase of the project,” said Konny Lindberg.

Konny started working at Umeå Energi eight years ago and has previously worked as a pipe designer, among other things.

“When I started working at the heating plant in Ålidhem, I had a feeling that the pipe system had some critical points, which we have now detected with FVB’s help. This is a plant with a lot of pipes mounted very close together. When the heating plant was the main production plant, there were few stops and starts and thus a more even temperature,” said Konny Lindberg.

“Having a lot of stops and starts with major variations in temperature and pressure, typical for a peak load plant, is more strenuous on the pipes. So, it seemed pressing to find out the actual condition of the various pipes and how worn they are.”

FVB won the procurement for the work, which included 3D scanning, 3D modeling, and expansion calculation. In early March, just before the corona pandemic broke out in earnest, David Jonsson, Jihad Ajlouni, and Eric Skoglund from FVB were on site at Ålidhem’s heating plant for a two-week period.

“We saw immediately that it was a very complex pipe system, so it was a very intensive task when we were on site, but afterwards we have had access to all the information,” said David Jonsson, who has handled all the work from Västerås since the scanning of the heating plant in Umeå.

“I have to admit I was a little skeptical at first that we had to do so much work remotely, but it has worked incredibly well. It’s about good technology and good planning, but also about trusting each other’s competence,” said Konny Lindberg.

To produce the kind of information FVB got through scanning used to be a time-consuming process involving manual measuring. These days, a laser scanner is set up on a stand, which photographs 360° around and then measures millions of points from its position with millimeter-level accuracy. The scanner is then moved around the plant so that the entire plant is scanned.

“We can see a quick version of what we scanned right away at the site, so we don’t risk missing anything,” said David Jonsson.

During the onsite part of the project, the pipe systems were also traced, and necessary information was documented for the 3D model and expansion calculation.

After measuring the plant, David Jonsson, Jihad Ajlouni, and Dennis Kilestad have built a 3D model containing information on all components. They then conducted expansion calculations on the pipe system and identified the points in the system that are the most critical.

“We have now completed all parts of the project, and the task for Umeå Energi is now to deal with these critical points,” said David Jonsson.

Konny Lindberg is very satisfied with how the work was done and the information they have now received.

“Now we can go from having a sense to actually knowing where there are critical points in the pipe system. This gives us control. It’s very likely that we will continue to work in this way with our other plants as well,” said Konny Lindberg.

“Having everything collected in 3D means that I can go into the plant, even if I’m not on site. I’ve been able to retrieve a lot of information I didn’t previously have access to, which is a major added value,” Konny Lindberg continued.

Regarding the critical points, Umeå Energi has already taken a number of safety measures.

“We are talking about pipes with 120°C water. It’s critical that they don’t break down and injure any of the staff. We have set up cameras and developed new procedures when working on the pipes that are critical. We have also developed strategies to minimise the load on the pipes,” said Konny Lindberg, who concluded: “The next step is to rebuild and reinforce the critical parts of the plant. This will be done during 2021 and will create a safer plant.”