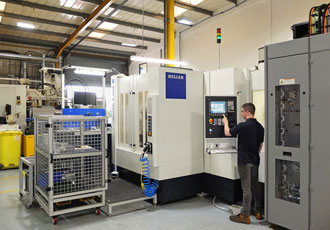 Manufacturer of braking systems for rail vehicles is the specialism of Knorr-Bremse Rail Systems UK. Its patented EP2002 distributed brake control is what the company claims to be as the best in the world and is the de-facto standard on all new trains for London Underground as well as metros in Bangkok, Dubai, Manila and throughout China.

Designed in the company’s engineering and manufacturing facility in Melksham, Wiltshire to a high specification, which includes 25-micron dimensional tolerances and a mirror finish of 0.2 CLA in the valve bores, the products comprise eight main prismatic parts. They are machined in a production facility in nearby Knorr-Bremse Corsham from solid aluminium on six Heller twin-pallet, Horizontal-spindle Machining Centres (HMCs). The latest was installed in July 2017, fitted with a four-pallet pool.

Paul Ranford, Improvements Manager at Corsham commented: “Our EP2002 brake control system was introduced in 2004. Production grew steadily until the end of 2015, not least because it became the standard for railway vehicle bogies in China. Our units have been installed on metro systems in over 30 cities in China including Shenyang in the north-east via Beijing down to Shenzhen, near Hong Kong.

“In 2016, demand increased further and 2017 will be another record year, with 15,000 units manufactured. The system’s success is down to the way braking effort is applied across the entire train to optimise braking performance and allow for different weights of the individual carriages and track conditions.

“However, the level of precision that goes into manufacturing the valves is also a strong selling point, as it translates into long service life, efficient braking and energy savings. For this reason, we need very high quality production equipment.”

Due to the higher manufacturing throughput, the company had to rethink its production strategies. It had already foreseen an upturn and installed a second stand-alone Heller HMC, an H2000, in 2015 to work alongside a Flexible Manufacturing System (FMS) comprising three Heller machines. The purchase of a sixth H2000 was brought forward and the decision was taken to have it equipped with a four-pallet pool to take maximum advantage of minimally attended production overnight.

Coupled with this investment, between July and September 2017 a lot of effort was put into programme optimisation to increase output further, resulting in an average reduction of 20% in machining cycle times. It has been achieved by speeding traverse rates to minimise idle times within cycles, increasing feeds and speeds during cutting using new grades of carbide insert tooling, and introducing special cutters like form tools and diamond-coated reamers, principally from Mapal.

Additionally, maximum flexibility is provided by having the potential to equip every Heller HMC to manufacture all eight types of prismatic valve component that go into the Smart, Rio and Gateway variants of the EP2002. The pallet-pool cell, for example, is tooled up to make six component types. Two kit boxes of parts for each EP2002 product are delivered line-side to the Melksham factory, where they are assembled.

Mr Ranford explained: “Knorr-Bremse Rail Systems UK inherited four of the Hellers, including those in the FMS, when we took over the subcontractor in Corsham that was previously manufacturing the parts for us on this site.

“When we purchased our additional stand-alone machine in 2015, we considered a couple of other potential suppliers of HMCs used in Knorr-Bremse Group’s Budapest manufacturing facility.

“However, we saw no reason to change, as Heller’s UK headquarters is only two hours away from us in Redditch. They also have a manufacturing operation there, so the technical expertise and service capability available in this country are more in-depth than would otherwise be the case.”

Both the stand-alone machine and the recent pallet-pool cell, which were passed off at Redditch and again after installation in Corsham, were running 24/7 within three weeks of delivery, according to Ranford, who added that the Heller team has a true understanding of Knorr-Bremse Rail Systems UK’s manufacturing operation.

He regards the working relationship with the supplier and the service back-up as first rate, which translates into minimum spindle down-time at the factory and the all-important high levels of manufacturing output that are needed.