How Sandvik has encouraged steel circularity 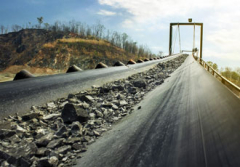 The circular economy promotes the reduction of waste and a continuous use of materials and natural resources, rejecting the notion of the 'take, make, dispose' linear economy. The Ellen McArthur Foundation recognises the circular model with three principles; design out waste and pollution, keep products and materials in use and regenerate natural systems.

Circularity is becoming vital in the reduction of CO2 emissions, and can help improve the environmental position of many industries. With the mining industry contributing a large percentage of global CO2 emissions, implementing circularity could help it make vital reductions.

The mining industry relies heavily on metal for its machinery. As metals are infinitely recyclable, it supports the practice of circularity. For instance, machine design can be assessed to produce machinery from recycled parts, which can then be reused again. However, the initial production of steel is one of the most energy intensive tasks in the world.

Steel is one of the most widely produced and consumed materials in the world - with its production enough to construct one Eiffel Tower every three minutes. Production involves extracting iron ore from the ground, which is combined with a coke reducing agent to remove oxygen from the ore. This process produces harmful emissions, which pollute the environment.

But the mining industry cannot operate without steel. To produce equipment, the industry predominantly uses manganese steel, which is renowned for its work-hardening properties and resistance to abrasion. This means that the material becomes harder with the more impact it receives, creating a low friction surface that is more suited to crushing. For this reason, manganese steel has been used in high impact applications for over 100 years, making it an ideal material for cone crushers.

Cone crushers are used to grind down rocks, which are fed into the top of the crusher and pressed between the mantle and the cone. This breaks the rock down into smaller fragments, which are then passed through lower levels of the crusher where they are broken down further. It’s vital that cone crushers are made from a material that provides the necessary force to grind the rocks, while withstanding the abrasive nature of the process.

However, the damaging effects of steel production call for changes to our resource management. While methods to improve steel production include replacing coke with hydrogen to eliminate CO2 emissions, producing new equipment still requires a lot of energy. So, how can the use of steel in mining equipment become more sustainable?

Sourcing manganese steel from one of the world’s most sustainable manganese foundries, based in Sweden, was the first step SMRT took towards its sustainable innovation. A total of 91% circular steel was used to manufacture wear parts, such as the cone and mantle of a cone crusher. These wear parts are reused to produce new wear parts for the cone crushers - creating a continuous cycle.

Moving away from a linear model, Sandvik increased the circularity and sustainability of its products and eliminated 79% of production emissions. In addition, Sandvik cone crushers help SMRT’s customers to lower their environmental impact as they are buying from the circular economy - contributing to their own sustainability goals.

With mining contributing towards CO2 emissions in more ways than one, it’s essential that the industry uses methods that reduce emissions. Reusing and recycling steel to manufacture mining equipment has demonstrated an opportunity that helps meet the sustainability goals of both equipment suppliers and their customers. If the industry wants to become circular, taking a look at equipment a good place to start.