Are temperatures rising too high for UK power? 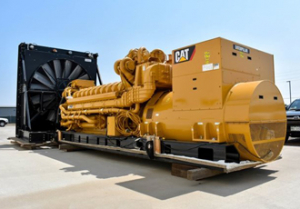 In August 2020, roadside recovery provider, Green Flag predicted a surge in breakdowns due to the UK’s hot weather - 15 drivers were predicted to break down every minute over the period of the heatwave. As well as creating issues with tyre pressure and chemicals in car batteries, hot weather can cause engines to overheat. Facilities managers need confidence that the same won’t happen to the engines in their back-up generators.

Here Jason Harryman, UK Sales and Business Development Manager at Finning UK & Ireland, discusses whether UK temperatures are rising, and if generator owners have cause for concern.

The Met Office recently recorded the hottest day in August for 17 years, with temperatures exceeding 36°C in parts of South East England. According to the Met Office’s 2019 State of the UK Climate report, the UK’s average temperature that year was 1.1°C above levels recorded between 1961-1990. The report also found that the most recent decade was 0.9°C warmer across the UK than the 1961-1990 average.

If the UK’s climate is getting gradually warmer, businesses may need to consider the impact of higher temperatures on their generators. Site conditions, such as altitude and relative humidity, will cause the ambient capability to vary and this can be a problem for older equipment built to suit cooler climates.

Diesel engines provide essential power and allow businesses to continue operating during power outages. While the need for temporary power is short term, it is important to prepare for the long-term when choosing a gen set. This may include selecting a model with an ambient capability suitable for warmer temperatures, to increase confidence that it will reliably kick in when it is needed.

The ambient capability of a generator is the maximum temperature that the cooling system can operate at effectively without the gen set shutting down to protect itself.  When the generator’s engine is running, coolant is pumped through the radiator where the engine fan blows ambient air through. This reduces the temperature of the coolant and prevents the engine from overheating.

When an enclosure is fitted to a gen set with a radiator and pusher/blower fan, it will lower the ambient capability. This is because the cooling air is restricted, meaning it heats up before it reaches the radiator core.

If ambient temperatures rise, businesses should establish whether their existing gen set can withstand the higher temperatures and, if not, what they can do about it. The ambient capability is determined by the generator’s design and is not something you can retrofit. Therefore, businesses must assess the ambient capability of the engine before purchasing a particular model, and operators of older models may need to upgrade in the years to come.

While gen sets were originally built with a maximum ambient capability of 28°C, manufacturers have increased this to 35°C in newer models of equipment. For example, by facilitating airflow to aid the reduction in coolant temperature. Consequently, many engines can operate at higher temperatures without shutting down.

Hot weather may lead to increased car breakdowns, but it needn’t increase problems with back-up power. Consulting with your generator supplier can help you understand the ambient capabilities of your engine, and its ability to perform in warmer weather.