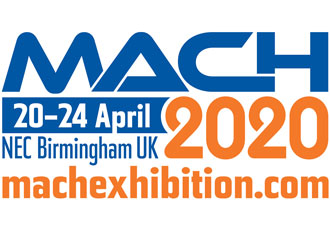 The Manufacturing Technologies Association (MTA) have announced that for the fifth consecutive show Lloyds Bank will be the headline sponsors of MACH 2020. MACH 2020 is scheduled to take place from 20th-24th April at the NEC, Birmingham. The exhibition will showcase the latest in manufacturing technologies, with Lloyds Bank's involvement being a pivotal part of the event.

James Selka DL, CEO of the MTA, who organise MACH on behalf of industry, said: "We have had a fantastic working relationship with Lloyds Bank over the course of their sponsorship of MACH. We share the same vision - to increase the UK's productivity while seeing manufacturers employ the latest technology to achieve it."

He continued: "With Lloyd Bank's pledge to lend a further £1bn per year to the UK manufacturing sector until 2020 and the expansion of the Annual Investment Allowance from £200,000 to £1,000,000, MACH 2020 is the perfect platform to stimulate investment. It is integral to the success of MACH that our exhibitors and visitors can have proper access to finance, from a bank that understands manufacturers' needs."

David Atkinson, UK Head of Manufacturing at Lloyds Bank said: "Lloyds Bank has consistently shown commitment to UK manufacturing throughout its history. Aligning ourselves with the most widely recognised industrial trade show is a natural partnership for us. The MTA and Lloyds have been working hard to close the UK's productivity gap over the past four shows and we look forward to doing even more in 2020."