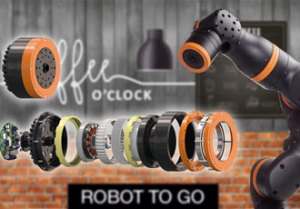 There is a strong emphasis on affordability with igus service robots. "With our Low-Cost Automation solutions, we enable design engineers to cost-effectively take part in the future of service robotics," said Adam Sanjurgo, who is responsible for Low Cost Automation solutions at igus UK. "This stimulates new ideas in the area of automation: robots or cobots that serve coffee or empty the dishwasher at home, that can be used in nursing and care applications as well as in industry." A cobot is a robot designed to work in close proximity to a human.

The gearboxes play an especially important role here, as they are the heart of any modern robot. igus introduced a new generation of tribo strain wave gearboxes for movement on the fifth robot axis last year, where friction and wear are minimised by means of lubrication-free tribo-polymers. Plastic components allow for a compact design and cost-effective production. The drygear strain wave system can be used along the last axis of an articulated arm, linear robot or delta robot, for example, to operate different gripper systems.

The new modular gearbox kit for cobots on display at the Hannover Messe 2021 is one of a wide range of Low-Cost Automation igus products. This easy to fit, 'plug & play' solution allows quick implementation of exciting cobot ideas, with integrated power electronics allowing immediate implantation.

The modular gearbox kit comes in sizes 80 and 105 and consists of tribo strain wave gear with integrated motor controller, force control electronics, absolute value encoder and motor. Inside the gearbox, there is a tribo wave generator, a tribo flex ring with external teeth, and a brushless DC motor with external rotor. An individual robot can also be configured as a cobot with the help of joining links attached to the gearbox and additional electronic components built into the design.

"For our lightweight strain wave gears, we see market opportunities in robots that weigh less than 8kg," said Sanjurgo. "Where Low Cost Automation is concerned, the robot’s weight is always important, not only the payload and a low price. Lightweight robots are easier to transport and can be used more efficiently on driverless transport systems, on seventh robot axes or, in the near future, even on drones."

Low weight is also a big advantage when designing cobot applications, as smaller masses mean that lower forces are generated during movement. HRC - or human robot collaboration - capabilities are possible thanks to absolute-value encoder technology within the gearbox. Forces and torque are measured and safely limited by means of the motor current. For this purpose, igus uses a double encoder, in which a measurement is carried out in front of and behind the joint in order to detect forces and torque levels and react accordingly.

The new fully integrated strain wave gearboxes are to be used this year in the new version of the ReBeL, igus’s service robot. The new generation of robots will be considerably slimmer and, due to the choice of integrated BLDC motors with power electronics, more cost-effective. Sanjurgo pointed out: "Our goal is to offer the ReBeL to the market for EU2,900, even for small orders. It should be able to carry 2kg, have a range of up to 650mm and weighing in at less than 10kg with a minimum running time of two million cycles." The cobot gearbox kit supports the wide portfolio of Low-Cost Automation products – from gearboxes and a large variety of robot kinematics to the control system. Low Cost Automation means both cost-effective prices for new users and automating only as much as necessary, so the investment pays for itself in just a few months.

The new modular gearbox system will also be available on RBTX.com, the online robot marketplace. Interested parties can build their robot kinematics with vision, safety or gripper components that matches their requirements and their budget exactly. The igus promise is that everything fits together, both hardware and software, in line with the igus 'Build or Buy' approach, where customers can build a robot themselves or obtain a ready-made solution.