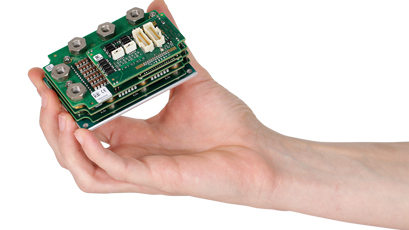 Pressure testing on a new remotely operated vehicle (ROV) has demonstrated that a special version 5.5 kW servo drive from Elmo Motion Control can withstand 700 bar, equivalent to a depth of 7,000 meters. The fly-out ROV built by All Oceans Engineering (AOE) is an auxiliary vehicle which assists larger ROVs with complex tasks on the seabed.

Thanks to the high-power density, small footprint and pressure performance of Elmo’s Gold Twitter drive it can operate in some of the world’s deepest oceans.

A fly-out ROV operates in tandem with a larger host ROV, to which it is tethered. It is used in deep sea mining, drilling, salvage and scientific applications. It can function as a “buddy” ROV by using onboard lights and cameras to provide additional illumination and visual feedback during inspections.

This reduces the likelihood of mistakes during complex tasks and speeds up work rate. Its smaller size and six degrees of movement also enable it to perform a scout function, helping to guide the host ROV through congested spaces such as shipwrecks and geological features.

Crucially, it must be capable of operating with 100 percent reliability, particularly at extreme depths, as ROVs are expensive and difficult to replace. The fly-out ROV’s ability to function at depth must far exceed that of the host ROV, as the fly-out is likely the only hope of recovery in the event of a fault.

Called the MAC-ROV, it requires eight servo drives with sufficient power to provide precision control for the eight thrusters. An earlier MAC-ROV design used a pressure vessel to house the servo drives.

However, AOE required that the servo drives fit within a smaller footprint in order to incorporate additional components such as a voltage regulator within the size restrictions.

Brian Abel, Managing Director, AOE, had previously been impressed with the reliability and capability of Elmo Motion Control’s products and was eager to see if they could be pushed even further. Abel suggested that housing the drives within the thruster itself would free up valuable space inside the pressure vessel. However, achieving this meant that the Gold Twitter must withstand pressure of 700 bar – equivalent to a ton of pressure on each drive. Any fault at that pressure would instantly damage the drive, so it was crucial that the ROV and its components passed all functional tests prior to use.

Abel explains: “No one can afford to lose an ROV on the seabed, so we needed to guarantee the reliability of each component part. Engineering an ROV for such extreme depths, with severe limitations on space and weight, is a huge challenge. We were keen to free up space inside the pressure vessel to include additional controls, cameras and sonar functions, but found that the only bit we couldn’t engineer was the servo drive. That’s where Elmo stepped in.”

A special version of Elmo’s Gold Twitter servo drive was developed for handling high pressures due to extreme depths. This meant testing the drive beyond any levels previously undertaken.

The pressure testing was carried out over two days at AOE’s facility in Aberdeen, during which it was found that the drive could still respond and operate at 700 bar without any issues.

It was then inspected for physical damage before undergoing standard production tests at Elmo’s Head Office in Israel. The modified unit passed all tests.

Abel continues: “The Gold Twitter was the final piece in the puzzle, so we were extremely pleased that it came through such rigorous testing. ROV operation and engineering is difficult enough as it is, let alone at these kinds of depths, so having a second pair of eyes on the seabed is incredibly useful. The performance of Elmo’s drives will help the MAC-ROV to revolutionise deep sea ROV applications.”

Application Engineer Rob Greenhalgh, who supervised the project for Elmo, sees the partnership as being mutually beneficial: “It’s not always practical to pressure test all of our products and variants to this extent,” he says, “so we were delighted when the opportunity arose to make use of AOE’s testing facilities, push our products to the limit, and prove that the Gold Twitter can deliver under pressure”.