Putting the cherry on top in Bakery Automation 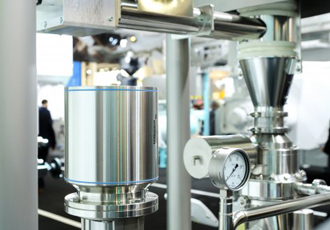 Bühler has developed a solution perfect for the dedicated bakers out there, JetMix for the pre-ferment, which provides better hygiene thanks to KOLLMORGEN´s stainless-steel servo motors. Using the AKMH stainless-steel motor from KOLLMORGEN, Bühler drives pumps, dosing units, and a centrifugal stirrer.

No hearty rye bread without sourdough. The stollen becomes deliciously soft when some of the baking ingredients are first mixed together and left to rise (thanks to the properties of yeast) before all the other ingredients are blended into the main dough. The mixture made mainly from cereal flour and bulk liquids such as water and milk is known as pre-ferment among bakers. With the JetMix, Bühler has developed a solution for the fully automated production of pre-ferment and sourdough. By using AKMH stainless steel servo motors from KOLLMORGEN, Bühler successfully combined high productivity with maximum hygiene.

Combine water and flour into a smooth and lump-free pre-ferment using dough hooks - this view is shared in domestic kitchens and among the medium-sized bakery sector. If the focus is on larger bakeries, then the JetMix is the best solution. The compact machine from Bühler does not combine water and flour mechanically, but through effective hydration. 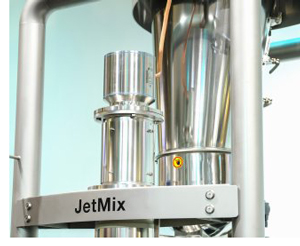 During this continual process, each flour particle is evenly hydrated by the finely atomised water spray. The result of this process has impressed users, mainly thanks to its high productivity and the quality of the fine and smooth pre-ferment.

The quicker way to the perfect pre-ferment
The technical aspect of the JetMix consists of four servo axes: Two of them form the pump drive for the water and ensure the pre-ferment is pushed along. Each of these axes drives the dosing screw as well as the centrifugal stirrer. “There, the flour is accelerated radially so that we can create a perfectly formed ring from flour”, described Heinz Lauermann, Team Leader of Material Handling Powder and Liquids at Bühler.

The ring of flour that arises from the centripetal force reacts with the water spray in the mixing tube, which is introduced from the outside through fine nozzles by the servomotor driven pumps. The pressure is accurately regulated by the precisely operated servo drive. This precision is therefore necessary, because when the flour and water come into contact, they coalesce into a lump-free dough. “Mechanical kneading methods for dough production are always associated with a high energy input. With the JetMix, the production of pre-ferment is significantly faster and more energy efficient”, emphasises Lauermann. The Swiss works at Bühler´s Headquarters is in Uzwil.

Always enthusiastic about special ideas and alternative solutions, for Heinz Lauermann, the advancement of the JetMix, fitted with a stainless-steel servomotor from KOLLMORGEN, which was first presented at a specialist trade fair in the USA, illustrates a highlight in the industry from a hygiene perspective.

The most powerful of the four AKMH stainless-steel motors drives the centrifuge that produces the ring of flour - comparable to a hand blender. “The broad speed control range of the motor helped us a lot during development to identify the correct speed for different types of flour and pre-ferments.” 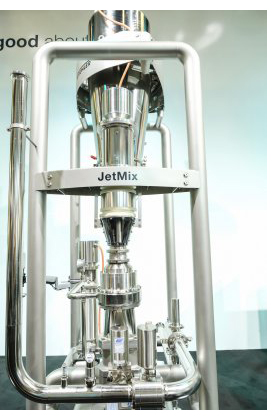 The finely balanced interplay between the spinning speed and the water spray being introduced with a pressure of up to 16 bar ultimately guarantees the perfect mixture - and can therefore also be stored as a tried-and-tested reproducible pre-ferment recipe in the control system.

“If we had small drops rather than a fine spray, we would get lumps. Drops create lumps,” said Lauermann, who explains that after being mix in the JetMix, the pre-ferment is pumped into a storage tank for further fermentation. According to Bühler, the JetMix´s performance stands at 3.0 tonnes per hour.

“If we multiply this amount by four, then we get the quantity of finished dough.” This makes 12 tonnes - and they are needed. The capacity of the ovens is especially large in industrial bakeries associated with discount stores. Around 100-120 tonnes of flour are processed daily for bread, bread rolls, cakes, and baked goods.

A high speed control range for production and cleaning
Considering these quantities in a price-sensitive market with low profit margins, there is the risk that little attention will be paid to cleaning the machines. “This task reduces productivity. The longer the cleaning takes, the less the companies earn.” During the development of the JetMix, Bühler was adamant that it would be equipped for CIP i.e. that it must be attached to a central cleaning system (Clean In Place).

The AKMH stainless-steel motors from KOLLMORGEN must, therefore, operate at a high rotational speed, as that is required during the production phase. “That was an important discussion in the design of the drive system, to obtain a water velocity of up to 3m/s, so that during cleaning, leftover dough does not remain stuck on the sides.”

Moreover, the drive systems must deliver such a performance that they can even push a so-called pig through the pipes. This is shaped in a figure-of-eight, nestles up to the sides and pushes the dough caught in the pipe in to the fermentation tank. Bread factories waste less food because of this and do not excessively burden the CIP system or the local sewage plant. Furthermore, bread dough does not pass well through the sewage system and quickly begins to rot.

A more hygienic stainless-steel motor with a single cable
Heinz Lauermann even describes the exterior handle of the AKMH stainless-steel motors from KOLLMORGEN as pioneering. The use of stainless-steel 1.4404 makes the AKMH series corrosion-resistant against aggressive cleaning products. The design of all the edges to have a radius of at least 3mm and the surface finishes with a roughness of less than 0.8μm prevents the accumulation of dirt. 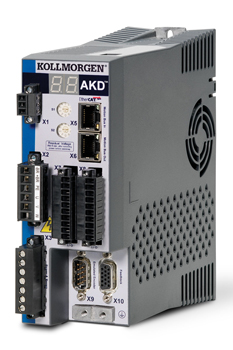 The AKMH stainless-steel motors are connected by just one cable, including recirculation to the AKD servo drives, so that the installation of Bühler’s JetMix also contributes to the hygienic aspect. On the one hand, halving the cables halves time and space during installation and, on the other hand, is also an advantage for hygiene and operational safety. Using just one cable means soling and leaks are less likely. “Integrating the recirculation system in the motor cable was worked out very well by KOLLMORGEN”, acknowledges Heinz Lauermann. He describes a hygienic motor including very perfectly rounded motor mountings.

The compact units of sizes two to six are also used outside of the baking industry, especially in machine areas with direct product contact and aseptic processes. The AKMH stainless steel servo motor dissipates any lost heat effectively to the outside and therefore lowers derating. As a consequence, the FDA certified series, developed according to the EHEDG guidelines, supplies higher continuous torques at lower volumes.

The Bottom Line
Bühler’s JetMix clearly demonstrates how hygiene properties and cleaning capabilities of machines in the food industry can effectively be improved when stainless-steel motors are used. It is not enough, however, to be satisfied with the material selection for the motor housings. Rather, the contour guide, connection technology and function must perfectly meet the requirements of Food Safety. “Our eyes have been opened from a hygienic perspective by AKMH,” summarised Lauermann.