Power-dense servo drive reduces wiring and filtering to save space 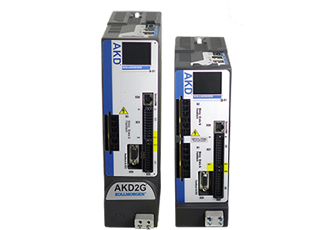 Kollmorgen has announced the new AKD2G Servo Drive, which is a dual-axis AKD2G, one of the most power-dense industrial servo drives on the market. . It substantially reduces mains wiring, fuses, and filtering to save significant panel space and cost. The AKD2G features expandable I/O (without increasing the size), removable memory, dual-channel STO, and the first drive-resident graphic display in the industry.

Other highlights include: Workbench interface, optimised hybrid connector, and speed – its multicore Compute Engine, Servo on a Chip, is far more powerful than other servo drives.

The AKM2G is a configurable, high-performance synchronous servo motor with increased power density and improved torque/speed ratio, allowing OEMs to get up to 30% more performance out of an equivalent size motor or achieve the same performance with a smaller motor. Together, the AKD2G and AKM2G create an unparalleled servo motor system solution.