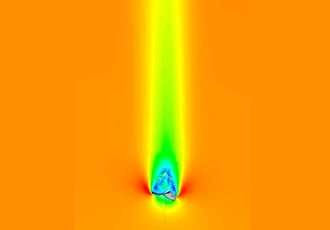 Improving the design of drills capable of excavating deep holes should increase their performance and longevity. Scientists from A*STAR develop a computational model that can determine the ideal drill design, achieving significant savings. In designing a drill, a crucial consideration is the effective removal of material, known as chips. A standard drill bit, the part of the drill that excavates the hole, removes chips by having a spiral shape that carries the chips up the length of the bit and out of the hole entrance.

But there is a limit to the depth that can be reached by spiral drill bit, usually a distance between five to ten times the bit diameter. An alternative approach, known as gundrilling, can create holes with a depth-to-diameter ratio of more than three hundred.

The unusual shape of the tip of a gundrill bit gives it a single cutting edge that enables the drill bit to self-center and ensures deep and straight holes. Chips in a gundrill are removed by forcing a fluid through the bit at high pressure. This fluid also acts as a coolant to prevent damage to both the cutting surface and the drill bearings.

Guan Leong Tnay from the A*STAR Singapore Institute of Manufacturing Technology and colleagues now achieve this by developing a novel methodology to simulate gundrill coolant flow based on a technique called computational fluid dynamics.

"Gundrill geometry is complicated; changing any single parameter could affect the coolant flow," explains Tnay. "To improve the drilling process, it is necessary to understand the coolant flow behaviour."

Tnay and co-workers started by experimentally measuring the resistance exerted on a chip falling through a tube filled with the cooling fluid. The team then developed their computational fluid dynamics model to recreate the drag coefficients determined by these experimental results. Once they knew the model worked, the researchers could compute the fluid flow and chip transport in gundrills with different geometries.

They considered the overall shape of the tip, referred to as the nose grind contour, the number and shape of the coolant flow holes running inside the drill bit, and the angle of the cutting edge.

Their results indicated that the optimum design has a kidney-shaped cooling holes, a zero-degree shoulder angle and a nose grind contour known as N4. "With this optimisation of tool geometry, roughly a 30 per cent improvement in tool life is achieved compared to the current commercial gundrill design," says Tnay.