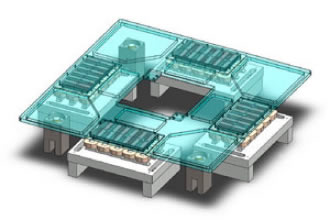 A magnetic system could precisely control the movement of levitating objects for many manufacturing applications. Magnetic levitation (Maglev) is well known for its use in high-speed rail networks, but could also be applied at smaller scales in medicine and electronics. To do so, researchers must be able to precisely control electromagnetic fields so that they can move and rotate objects without touching them.

Now, Teo Tat Joo and co-workers at the Agency for Science, Technology and Research (A*STAR) Singapore Institute of Manufacturing Technology (SIMTech) and National University of Singapore have developed a Maglev system that can produce linear and rotational motion in all three dimensions. This system provides nanometer-scale precision in these movements, and is simpler and potentially less energy-intensive than other recent attempts.

"Today's existing precision mechatronics systems can only be classified as having one micrometer positioning accuracy over one meter - one part-per-million or 1 PPM," says Teo. "On the other hand, Maglev technology has the potential to achieve a truly nanometer positioning system - 0.001 PPM."

To build their new Maglev system, Teo and co-workers employed a special arrangement of permanent magnets called a Halbach array, which produces a strong magnetic field on one side but not the other.

They positioned four Halbach arrays on a square platform above several energised coils of wire, and used analytical force modeling to work out how the magnets and coils would interact.

Then, by carefully controlling the electrical current in different coils, they were able to move or rotate the square platform at several different speeds, with a positional error of just 50 nanometers.

"One of the main technical challenges we faced was that the large number of coils, with high electrical resistance, require a high power supply," says Teo. "We are currently developing a scheme that allows selective switching of the coils; this will improve the energy efficiency and significantly reduce the cost of the Maglev system."

Perhaps the most promising uses of the Maglev system developed by the A*STAR team would be in processes that require a particle-free or vacuum environment, as Teo explains:

"The contactless nature of Maglev ensures that no contaminating particles are generated from friction between surfaces. For example, future wafer lithography processes such as extreme UV lithography, which operates in a vacuum, will require a Maglev system to handle the wafer."