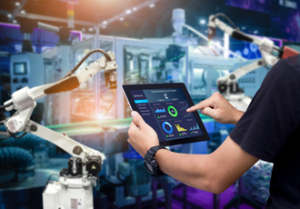 British manufacturing companies moved at speed towards digitalisation when the pandemic struck, with nearly half switching to digital working practices within two weeks of lockdown, according to new research, ‘Digital Skills for a Digital Manufacturing Future’, published by Make UK, the manufacturers’ organisation and Sage.

With just a fortnight’s digital installation and planning, 94% of companies said they had staff working successfully from home in industries often associated with manual tasks and a high proportion of production-based work.

Some 87% of manufacturers said investing in digital training gave them a competitive advantage, and nearly two-thirds (64%) had undertaken training to improve digital skills in the last 12 months. Interestingly, it was the very smallest and largest companies which were more likely to have taken on such training - 83% of companies with up to 9 employees and 94% employing more than 1,000 staff.

In the past few months, it is those new skills which enabled the quick adoption of digital to deliver the remote production and monitoring systems which kept vital lines working effectively, virtual trade exhibitions and the use of 3D avatars for sustainable sampling and virtual commissioning. The use of digital was also found to accelerate innovation plans.

While digital skills were paramount in keeping Britain’s manufacturers open for business and enabling the switch in production to vital PPE equipment and ventilators for the NHS, this acceleration must continue at pace to promote continued growth as the sector rebuilds. It is good news that 45% of companies told us they had already changed their skills training and strategies in the light of COVID-19. But cost pressures and the need to socially distance has meant that two thirds of companies have put some or all of their training on hold.

Worryingly, two-thirds of manufacturers do not think the education and training system is keeping pace with digital technology advancements - indicating a serious lag between the UK’s ambitions to be a world leader in digital adoption and our skills and training system delivering what is needed.

To futureproof the sector, Government and industry need to establish a National Skills Taskforce, to deliver a digital skills programme and a digital skills account for lifelong learning to enable ongoing reskilling.

Stephen Phipson, CEO of Make UK, the manufacturers organisation said: “The last six months have shown that digital has been crucial in making it possible for manufacturers to continue production successfully against a backdrop of COVID - highlighting the need to ramp up digital skills within the manufacturing sector even further as companies move to build future resilience and boost productivity.

“Most companies put some of their workers on furlough but sadly the subsequent fall in demand has meant that some highly skilled people have gone on to lose their jobs. As the sector is fights to get its order books back to something like normal, it is crucially important that we do everything possible to keep hold of these skilled people who are currently unemployed. This is why government must work with industry to set up a National Skills Taskforce to match those skilled workers with employers who so desperately need those skills alongside developing a lifelong learning programme to constantly upskill existing employees.

“Manufacturers should also look to harness the power of young people who are digitally fluent to fully embrace digitalisation throughout UK manufacturing.”

Rob Sinfield, VP Manufacturing, Sage added: “This Make UK research is promising, yet also acts as a stark reminder of the challenges businesses, particularly manufacturers, face in the coming months. It is clear the 91% of manufacturers that have benefited from the adoption of new technology understand the importance of digital; the ones that have invested and adopted in digital are the ones that have adapted quickest.

“As two-thirds of manufacturers don’t think the education and training system is fit for purpose to help them adopt of new digital technologies, we now need to look at what support there is for them to bridge any digital skills gaps.

“Sage’s own research with Capital Economics also found that digital is key for businesses to remain resilient, with 67% wanting to invest more in tech to deliver performance improvements. So, there is a clear tangible desire from businesses to invest in digital with great benefits to be had. It is now up to the Government and industry to jointly address the support needed to nurture and grow these skills to help reduce unemployment and strengthen our sector.”