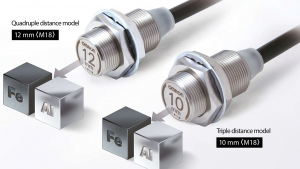 Featuring improved sensing technology and robust construction, the E2EW series can significantly reduce downtime and improve productivity in automotive welding applications by reducing the risk of sudden stoppages due to materials misidentification or sensor failure.

A key feature of the sensors are their ability to identify iron and aluminium accurately at the same distance.

This is particularly useful in modern automotive applications, where the trend towards lighter vehicles for improved fuel consumption and the increase in demand for electric vehicles is prompting a change in component materials specification from heavier iron to lighter aluminium.

As a result, production lines are increasingly using a mix of the two.

Previous full metal proximity sensors have struggled to differentiate efficiently between these metals because the sensing distance for aluminium is shorter than that for iron. This makes the design, start-up, and maintenance of production lines complicated and can lead to production errors and inefficiencies.

This enables the sensors to use the same distance for detecting both metals, making machine setup and changeover much simpler and quicker, as well as reducing false detection rates – even for unsteady sensing objects.

As a result, there are far fewer unexpected stoppages, improving productivity.

A full metal body equips the E2EW series for use in the harshest environments, greatly reducing the likelihood of downtime due to sensor replacement and maintenance.

In addition, the sensors feature unique technologies to prevent coating abrasion: achieving spatter resistance for up to 60 times longer than previous models. This not only reduces the deterioration of coating performance after maintenance for spatter clean-ups, but also extends the replacement frequency of sensors, saving cost and improving the bottom line.

The OMRON E2EW series is also equipped with I/O Link, which means it can be connected into wider production line networks. This enables useful data regarding sensor performance to be shared and monitored, making it easier to predict and schedule essential maintenance.