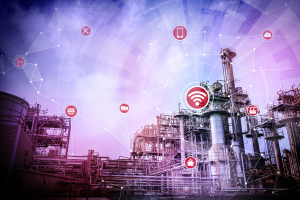 In our increasingly connected world, the ability to monitor and measure gives us the ability to control and improve. At the heart of this process is the gas sensing element that converts a physical parameter to an electrical signal which can then be monitored and recorded. The IoT has given us the ability to deploy, connect, monitor and control globally. However, this is a primarily digital world and incorporating analog sensors into IoT technology requires additional steps and components.

In this technical article, we will look at gas sensing technology and discuss where and why it is used. We will then look at some of the latest digital devices and the advanced features they offer to designers.

The human nose is an amazing instrument with 400 types of scent receptors that allow us to smell around 1 trillion different odors. However, from a scientific viewpoint the human sense of smell is limited as it is not able to identify the types or concentrations of gases present in our atmosphere or environment. To address this, gas sensors are available that are able to detect different types of gases based upon their scientific characteristics, such as reactive, inert, poisonous, flammable and others.

As air quality is so important to long-term wellbeing and, in some cases, short-term safety, many of the market requirements for gas sensing are driven by government legislation aimed at areas such as people protection, accident prevention and health / wellbeing.

Smart Buildings: Buildings are becoming smarter and safer due, in part, to the ability to monitor and control the environment within them. Gas sensors are used smoke / fire detection applications as well as to monitor and manage the Indoor Air Quality (IAQ) through control of Heating, Ventilation and Air Conditioning (HVAC) systems. As legislation becomes stricter, employers have a duty of care to provide a safe working environment and monitoring and logging IAQ is a way of demonstrating compliance.

Industrial: Gases are used in many industrial processes and here gas sensors are used to control the concentration of gases being used as well as detecting problems such as unintended leaks into the working atmosphere that could be dangerous or hazardous to health. While many gases can be detected, the most common include carbon monoxide (CO), hydrogen sulphide (H2S), oxygen (O2) and sulfur dioxide (SO2).

Medical: With the COVID-19 situation, there is a huge focus on respiratory medicine. O2 sensors provide an essential, life-critical function in a variety of equipment used to battle this disease including general respirators / ventilators as well as equipment that performs lung function analysis. These sensors are also used in many other medical applications including the administration of anaesthesia and incubators.

Electrochemical gas sensors contain two electrodes (working and sensor) with an ion conductor filling the void between them - very similar to a fuel cell. When a gas such as O2 or CO comes into contact with the working electrode the gas is oxidised. By connecting the electrodes via a short circuit, protons (H+) flow towards the counter electrode. By measuring this current flow, the device becomes an effective current sensor.

Catalytic (Pellistor) sensors are sensitive to most flammable gases and vapors. They generally consist of two coils of fine platinum wire, each embedded in a bead of alumina connected into a Wheatstone bridge circuit. One bead is impregnated with a catalyst that promotes oxidation while the other is treated to prevent oxidation.

Current is passed through the coils so that they heat to around 500℃ (the temperature at which oxidation occurs) and, at this temperature, oxidation will increase the resistance of the platinum wire. This change in resistance imbalances the bridge, creating a potential difference which can be measured. The resistance change is linear for most gases.

A further type of gas sensor is Non-Dispersive Infrared (NDIR). These rely on the fact that infrared light is absorbed by gas molecules at a particular wavelength. NDIR gas sensors consist of an infrared source, detector, optical filter, gas cell and signal processing electronics. The sensor has two sensing elements, in front of which are placed optical filters of different wavelengths - one of which is ‘tuned’ to the gas to be detected.

Many applications for gas sensing are linked to the Internet of Things (IoT) so that small, inconspicuous sensors can be placed where they are needed to detect gas. This may be high in the rafters of a warehouse, or inside complex process machinery - or any other remote or difficult-to-access location.

The primary requirements for gas  sensors for IoT applications relates to their size and power consumption. As many IoT nodes are battery powered it is important that the sensor draws as little current as possible when operating and it can be put into a quiescent sleep mode when not measuring.

Generally, PCB space is at a premium in IoT (and other) applications and, while sensor elements may be small, a number of additional components are needed to process the sensor output. In most cases, an amplifier circuit will be needed along with an Analog to Digital Converter (ADC). Some form of communications IC will be needed to convert the digital data into a format that can be transmitted to the central processor. Unfortunately, all of these components consume space and power, making design of small IoT nodes challenging and shortening their operating life on a single coin cell.

The iSeries (‘intelligent series’) of gas sensors from City Technology are specifically intended to fulfil the needs of modern digital applications, especially IoT applications. These digital devices are not just smaller than the equivalent analog sensor, they offer a wealth of functionality that is simply not possible with analog devices. As all sensing and analog-to-digital conversion is done on board the sensor module, there is no need for data processing on the system MCU, thereby freeing up resources for other tasks.

The iSeries comprises a number of digital sensors capable of measuring a broad range of gases including SO2, H2S, O2, CO, NO, NH3, NO2, CH4 and CI2. Within the iSeries, each sensor has the same interface and footprint, so they can be used interchangeably to develop a range of gas measuring instruments.

Figure 4: The iSeries devices replace analog sensors with a highly integrated solution in a smaller package

Calibration is carried out in the factory and the data written to the sensor, removing the need for calibration during the manufacture of the measuring instrument. As the sensors age (as all sensors do), iSeries sensors can predict when readings will lack sufficient accuracy and give a warning allowing for maintenance to be planned as well as being able to self-detect faults and provide error codes with each reading.

For safety-critical applications where only an approved sensor can be used as a replacement, a ‘OEM lock’ code can be programmed into the iSeries module. If the instrument does not detect the correct code, it will shut down.

Despite all of the extended features and functionality, the highly reliable iSeries devices are less than half the height of a comparable analog sensor with a smaller footprint.