Riding the wave: bearings and their role in ocean energy 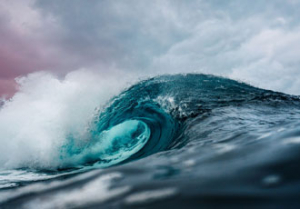 Estimates show that wave power could supply ten percent of the global demand for energy by the year 2050. If true, this would be a significant boost to a greener future, but currently, this renewable energy source is still in development. Here, Chris Johnson, Managing Director of SMB Bearings, explains how bearings will be a key enabler of ocean power.

On paper, wave power is straight forward. Ocean waves bob up and down to turn a turbine located on the surface or under water, to generate electricity that is transmitted to the grid. In reality, wave-power generation is not a widely employed commercial technology, compared with other renewable energy sources such as wind power and solar power, as it isn’t as cost competitive and has numerous environmental challenges.

But solar and wind power have one big downfall: they’re not always available. Waves on the other hand are relentless, offering an opportunity to generate electricity constantly, morning and night, summer and winter.

Making wave farms the norm will take time and a realistic outlook. Of course, wave power is restricted to areas near the ocean. Afterall, the cables the carry electricity can only be so long. But seeing as 40% of the world’s population live within 100 kilometres of the ocean, that means a whole lot of lights, gadgets and kettles can be powered by waves.

The world’s first commercial wave energy project is expected to be online by 2023, located in five kilometres offshore near Póvoa de Varzim in Portugal. The wave farm consists of a series of train carriage sized floats which ride waves and send power to a specially built substation at Agucadoura beach. Each float produces around 750KW of electricity - enough power to supply 500 homes.

The real challenge is to develop the hardware that can take on the environmental extremities. Waves constantly pound at the equipment, and very large storm waves can damage converters. Similarly, salty seawater corrodes or breaks down any metal part. Scientists and engineers are trying lots of different ways to overcome these challenges.

The bearings used in the wave energy converters and peripheral rotational equipment are a big factor in the wave farm’s success. While the world is looking to move away from fossil fuels, we can’t forget all the tried and tested technology to come out of the sector. Ceramic bearings being one of many components used in oil and gas rigs, that we should take into wave farms.

Design engineers could opt for 316 grade stainless steel bearings for parts above the water line, but for submerged applications, full ceramic bearings are often the best option.

Full ceramic bearings, made from zirconia or silicon nitride with PEEK cages and seals, offer excellent corrosion resistance in a marine environment. As ceramic bearings are not affected by seawater, they can be used in marine environments where they are permanently submerged and can cope with high loads, although not as high as traditional steel bearings. Check the load rating provided by the bearing manufacturer.

Beyond bearing material, quality and shaft fit are just as important for design engineers developing machinery and equipment for wave power test beds or fully fledged wave farms. The right bearings can minimise friction and corrosion while getting around the lubricant washout problem by eliminating the need for grease.

To make the 2050 projections correct, with wave power encompassing ten per cent of global energy demand, careful design considerations will need to be made.