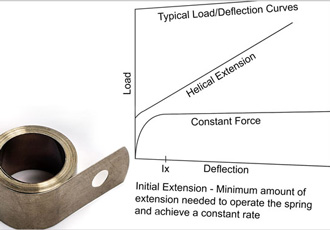 The Lee Spring extension type of constant force spring represents the most basic, yet most versatile, type of constant force spring. It is a pre-stressed flat strip of spring material which is formed into a virtually constant radius coils around itself or on a drum. When the strip is extended (deflected) the inherent stress resists the loading force, the same as a common extension spring, but at a nearly constant (zero) rate.

A constant torque is obtained when the outer end of the spring is attached to another spool and caused to wind in either the reverse or same direction as it is originally wound.

The full rated load of the spring is reached after being deflected to a length equal to 1.25 times its diameter. Thereafter, it maintains a relatively constant force regardless of extension length. Load is basically determined by the thickness and width of the material and the diameter of the coil.

As with all spring applications the mounting of the spring is crucial to its effective operation. A constant force spring is usually mounted by first tightly wrapping it on a drum, then attaching the free end to the loading force such as in a counterbalance application. This relationship can be reversed, however, with the free end mounted stationary and the spring itself providing the working force, as with carbon brushes in electrical apparatus.

The asymmetric design of a constant force spring gives rise to additional interesting possibilities such as tandem or laminar mounting which enables simple doubling of force – or the intriguing back-to-back style of installation which not only multiples force but also balances the asymmetric forces improving stability of the assembly.

This variety of possibilities gives rise to a range of considerations for the design engineer – possibilities that Lee Spring addresses on their Complete Guide to Spring Engineering website.