Keeping the bad guys out with glazed steel doors 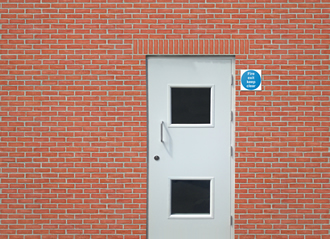 Ensuring that premises are secure against break-ins and unauthorised entry is a growing and constant concern for almost everyone who manages an organisation, event or building. Nick Cox, Area Sales Manager for sara LBS looks at how steel personnel doors can bring a level of extra confidence to many installations.

If you have ever been burgled you will know what an upsetting experience it can be. Most victims say the worst thing is not the loss of stolen property, or the damage; the biggest issue for most people is knowing that their own private space has been invaded.

The same emotions are felt when companies and other organisations have their premises broken into. The feeling of violation can be overwhelming.

This was particularly evident recently at a North London primary school that had an unwanted overnight visitor, who had come in through an outside door in one of the classrooms. The criminal was certainly determined as the door was so badly damaged that it could not be reused and the school had to order a new one.

A decision was made to replace the original aluminium door, with a steel one.

The repairs were being managed by Peter Stone of Haven Designs, a facilities management company that designs, builds, and refurbishes schools and other amenity buildings. The original was a glazed aluminium frame door, which was wrecked in the break in.

The new door was to be glazed, as the old one had been. However it was considered best to reduce the size of the glazed panel, so that if smashed it would not be big enough to allow another burglar easy access. sara LBS supplied the door with toughened glass to further impede unauthorised entry.

Steel doors are often used as fire doors, in which case as the temperature rises the steel expands and seals the door into its frame, preventing spoke from spreading and helping isolate the fire. sara LBS can also provide fire rated glass upon request.

However, the door at the school was unlikely to ever be near a fire, but instead was to be a designated fire escape route. At the teacher’s request sara LBS also fitted the door with a closer with a hold-open feature to allow cool fresh air into the classroom during the summer months.

Being fitted with an astragal cover over the lock side of the door, it is far more protected, as it is almost impossible to lever it open with a crowbar or similar tool. Further, the door is mounted on four dog bolt hinges that are fitted with substantial pins which locate into the hinge side of a door leaf when it is closed to make its mounting more secure and less susceptible to being barged in or kicked off its hinges.

sara LBS’s heavy weight hinged steel doors are designed to allow easy access for pedestrians, while offering increased security against break-ins. Single and double openings are available in a range of custom sizes, from 690-2600mm wide and from 2100-2900mm high.

The construction of the doors is based on 1-2mm Zintec, Aluzinc or steel sheets with a self supporting resin impregnated honeycomb or solid timber core. The frame is made from Zintec or Aluzinc.