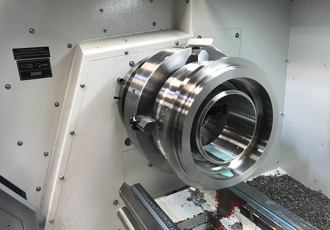 Cheshire Seals are a family run, independent manufacturer of machined parts in a wide variety of materials, ranging from aluminium to zirconium, taking in duplex stainless steels and nickel alloys and many exotic metals, through to plastics and rubbers for seal manufacture.  They also take initial customer design concepts and convert them into fully finished products, whether it’s a one-off prototype or a full production run.

Cheshire Seals was set up in 2008 by managing director, Paul Wallace and his fellow director, David Kennedy after seeing an opportunity to extend into both metal and plastic machining when working with their previous employer, a large industrial multinational who concentrated on higher volume, standard machining production.  Their initial decision to go it alone led to immediate success, resulting in having to quickly expand their factory as their specialist business grew.

Wallace explained: “We started with only 3 customers, but when some older contacts found out about our new venture, they quickly asked us to work on projects for them.  Our competitors in the general machining sector now also come to us for certain bespoke high specification work that they don’t get involved with and we can spend the time getting the processes right when developing prototypes for them.”

Wallace continued: “We service many markets from oil and gas, pharmaceuticals, food, hydraulics and rail transport so it’s essential to keep our skilled staff. We maintain this by taking on work that is increasingly varied - they like to be challenged and we like to challenge them too.

We now have 5 qualified engineers and 3 apprentices through this process and the quality of work we get from them is outstanding.”

The recently purchased 2-metre between centres, Harrison Alpha 1550XS has a generous swing over bed of 554mm and a 104mm spindle bore and it comes equipped with a large 15kW motor, allowing spindle speeds up to 2000 rpm.  The new machine also allows Cheshire Seals to manufacture products up to 450mm diameter (370mm diameter for components with a maximum length of 2,000mm).

The new Alpha lathe complements their existing workshop CNC lathe and milling equipment, which all use FANUC controls. Where dedicated CNC machines are used for large batches, the Alpha machine can be used for the smaller runs and their overall flexibility is now fully maximised.

Wallace said: “We had an existing Colchester centre lathe that had been very useful to us, but we needed the machining flexibility that the Alpha could bring.  We bought plenty of extra kit from Colchester for the Alpha and from day one it’s been put through its paces, is performing well and certainly earning its money.

We did look at other CNC machines but felt that the flexibility of the Alpha lathe and its various modes of operation with the Fanuc system were strong factors in our decision.  We find that the machine torque is excellent for cutting harder materials and the Alpha lathe has significantly improved our cutting and programming times through using ISO programming and using the 8-station turret.

“We’re also pleased to announce that we have our first female apprentice starting with us in January 2019 and one of the machines that she will be quickly trained on our Alpha XS lathe.”