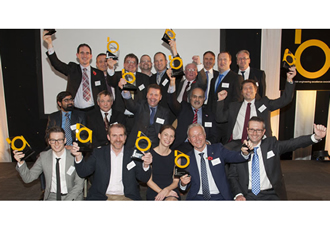 Medical device company, Lightpoint Medical, has been named as the winner of the Grand Prix prize at the 2016 British Engineering Excellence Awards (BEEAs), held yesterday at the HAC in London. Lightpoint Medical is developing pioneering imaging technology to improve health outcomes for cancer patients.

The company’s molecular imaging technology, based on Cerenkov Luminescence Imaging, has the potential to detect cancer in real-time during surgery, providing more accurate cancer treatment while sparing healthy tissue.

Surgery remains the primary treatment option for cancer, yet it is frequently unsuccessful as surgeons can't accurately tell the difference between diseased and healthy tissue during an operation. Consequently, patients frequently recover from surgery with cancer left behind, affecting for example, 1 in 4 breast cancer patients. By ensuring the removal of cancer in a single operation, the LightPath Imaging System promises a reduction in repeat operations, improved patient outcomes, quicker progression on to other therapies and reduced healthcare costs.

The Judges were so impressed with Lightpoint Medical’s early success that they were also named as the winner of the Electronic Product of the Year award for the LightPath Imaging System.

Commenting on the company’s outstanding success, Eric Wilkinson, Chairman of the Judges and COO of Cambridge Consultants, said: “Choosing the Grand Prix winner is always tough and generates much debate. The Judges felt that an organisation that can develop potentially life-changing technology, by ensuring the removal of cancerous tissue in a single operation, promising a reduction in repeat operations, and reduced healthcare costs deserves special recognition as a shining example of British Engineering Excellence.”

Luke Webster, Publishing Director of awards organiser MA Business, added: “Once again, the British Engineering Excellence Awards has attracted a host of impressive entries from brilliant British innovators. The LightPath Imaging Systems was one of a number of exceptional entries received and much debate went into deciding the Grand Prix winner. Through every category, the judges were deeply impressed by the quality of engineering put forward and the talent behind it. I congratulate all those entrants that were shortlisted and of course the winners.”

British Engineering Excellence award winners 2016
Small Company of the Year: Forth Engineering Sponsor: Innovate UK
The judges were looking for a company with a sound business plan, a product or service that meets a market need and the successful reception of that product. They also wanted to see evidence of either competing successfully with much larger rivals or exploiting a viable market niche. All with less than 20 employees. Forth Engineering started in 2000 with the simple idea of manufacturing and supplying hoses to customer specifications. Specialising in technical innovation, Forth continues to develop a range of remotely operated vehicles, radiation tolerant cameras and remote tooling, which are used by the nuclear industry.

Highly Commended Small Company of the Year: Emblation
The Judges found it exceptionally difficult to decide the winner of this category and decided to award a Highly Commended certificate to Emblation, global leader in the design, development and manufacture of microwave based medical devices. Through significant innovation, Emblation’s team has created the smallest and safest generator for the world’s largest medical technology company. The system is now in use globally and has made microwave ablation more accessible than ever before, with thousands of treatments being carried out each month.

Start Up of the Year: Ultrahaptics Sponsor: Cambridge Consultants
The Start-up of the Year category celebrates tomorrow’s companies and technological successes. The Judges were looking for a company established no earlier than 1st January 2012, developing mechanical and/or electronic products or offering engineering based services to customers in the UK and elsewhere. Ultrahaptics has created a way to feel virtual objects in mid-air, without the need to wear special equipment. Using ultrasound, the technology enables virtual buttons, shapes, switches and dials to be felt and manipulated. Ultrahaptics’ successful launch is underlined by the level of investment received during the last three years.

Design Team of the Year: Bytesnap Design and Cocoon Sponsor: Premier EDA Solutions
In this category the Judges were looking for entrants demonstrating the successful use of teamwork in the creation of an engineering or electronic product or system. In assessing the entries, the Judges wanted to see how the team was composed and evidence of how its members interacted to meet its budget and project milestones. In a fiercely contested category the judges awarded the top prize to Bytesnap and Cocoon for a tight, well scheduled design team with clearly outlined job descriptions and the expertise needed to deliver the design on time.

Materials Application of the Year: BAE Systems – Highly Robust Ground Platform Sponsor: Engineering Materials Magazine
The choice of material can make or break an engineering product, so the Judges were looking for evidence of how the properties of a particular material (or material combination) were exploited in order to solve a design challenge. The Highly Robust Ground Platform – or HRGP – from BAE Systems is a remotely controlled unmanned ground vehicle capable of surviving a landmine blast and remaining mission capable.

New Product of the Year (Electronic): Lightpoint Medical – LightPath Sponsor: New Electronics magazine
In assessing entries, the Judges looked for an electronic product or component that addresses a particular market need and which brings a significant performance improvement; either over a previous product or over competitive devices. The LightPath Imaging System from Lightpoint Medical is the first commercially available imaging system that tells surgeons about the precise location of cancer, ensuring diseased tissue is cleared in a single operation. The system integrates the latest imaging technology into a mobile device that can be used in busy operating theatres.

New Product of the Year (Mechanical): JCB - Hydradig Sponsor: Eureka! Magazine
In this category the Judges were looking for an engineering product for which an innovative approach has been used to meet a particular market need. They wanted to see evidence of how the need for the product was assessed, along with an indication of time to market. The JCB Hydradig is a revolutionary tool carrying solution, bringing new levels of innovation and engineering to the growing compact wheeled machine sector.

Highly Commended Mechanical Product of the Year: Punk Couplings, Punk Gim-Ball Torque Coupling.
Again the Judges found it difficult to choose an outright winner and decided to award another Highly Commended certificate. Punk Gim-Ball couplings feature three nested rings with spherical mating surfaces: each coupling is effectively a spherical bearing inside a spherical bearing. Using diametrically opposed axles, each mating pair of rings has a single free axis of relative rotation, one at 90° to the other. Thus, the mid ring acts like the cruciform component in a Cardan joint, rocking back and forth to cater for angular misalignment.

Young Design Engineer of the Year: Christopher Bellamy, Jaguar Land Rover Sponsor: RS Components
The judges took a range of factors into account, including: the knowledge which has been applied by the young engineer; the contribution made to projects; and the degree of innovation required. They also considered the nominee’s personal qualities that promote the engineering profession. Christopher Bellamy, has invented, designed and developed creative and novel solutions for customer problems. He has pioneered a human-centric design process – a concept new to Jaguar Land Rover – and close work with the consumer insight and human factors teams has delivered outstanding results.

Design Engineer of the Year: Alexander McDiarmid, Parker Bestobell Sponsor: maxon motor UK
Entrants in this category were nominated by fellow engineers who needed to demonstrate evidence of innovation within strict budgetary and time constraints and possibly solutions that improve on the initial design brief. A young, but influential design engineer, Alexander McDiarmid, is a pioneer in product design at Parker Bestobell, offering practical engineering skills and an understanding of industry. He plays a key role in developing the skills of the company’s apprentices and has driven innovation by designing and developing a highly effective new high pressure valve range.

Highly Commended Design Engineer of the Year: Simon Willis, 3form Design
This category was strongly contested once again and promoted much debate amongst the Judges. They felt, Simon has the unusual talent of being gifted in both engineering and the visual aspects of design. He has the ability to develop innovative exciting ideas that are robust and sound, exciting to look at and a delight to use.

Consultancy of the Year: Williams Advanced Engineering Sponsor: Institution of Mechanical Engineers (iMechE)
To identify the Consultancy of the Year, the Judges looked for evidence that the shortlisted companies are developing innovative and timely solutions to engineering problems posed to them by their customers. Other factors taken into account included the ratio of consultancy staff to the number of projects delivered, number of staff applied to those projects and their success. The Judges were also interested to see how the consultancy has developed during the last five years and how it plans to grow its business. Williams Advanced Engineering, the technology and engineering services business of the Williams Group, provides world class technical innovation, engineering, testing and manufacturing services to the automotive, motorsport, transport and energy sectors.

Judges’ Special Award: MQA, Audio Codec
This award is given, at the discretion of the Judges, to a person or company that, in their opinion, deserves particular recognition. While this company or person may not have won the category in which they were shortlisted, the Judges felt strongly that the entry was worthy of an award. The Judges agreed that the development of the MQA audio codec – and its positive reception by leading consumer electronics brands – shows the UK is more than capable of holding its own in this highly competitive market.