What is the most effective way to commutate a BLDC motor?

Home > Motors & Drives > What is the most effective way to commutate a BLDC motor?
4th March 2019
Source: CUI Inc
Posted By : Alex Lynn 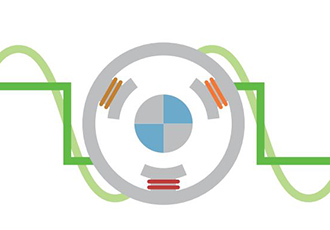 Brushless direct current electric motors, or BLDC motors for short, are electronically commutated motors powered by a dc electric source via an external motor controller. Unlike their brushed relatives, BLDC motors rely on external controllers to achieve commutation. Put simply, commutation is the process of switching the current in the motor phases to generate motion.

Brushed motors have physical brushes to achieve this process twice per rotation, while BLDC motors do not, hence the name. Due to the nature of their design, they can have any number of pole pairs for commutation.

BLDC motors provide significant advantages over traditional brushed motors. They typically offer an efficiency increase of 15-20%, require less maintenance without brushes to physically wear out, and deliver a flat torque curve at all rated speeds. While BLDC motors are not a new invention, widespread adoption had been slow due to the need for complicated control and feedback circuitry.

However, recent advancements in semiconductor technology, better permanent magnets and the growing demand for greater efficiency has led to BLDC motors replacing brushed motors in many applications. BLDC motors have found their niche in many industries, including white goods, automotive, aerospace, consumer, medical, industrial automation equipment and instrumentation.

With the industry moving in a direction that requires BLDC motors in more applications, many engineers are having to make the switch to this technology. And while the basics of motor design still apply, the addition of external control circuitry has added another set of design considerations to the equation. High on the list of design questions is how to obtain feedback for motor commutation.

Motor commutation
Before delving too far into feedback options for BLDC motors, it is important to understand why they are necessary. BLDC motors come in single phase, two-phase, and three-phase configurations; the most common configuration being three-phase. The number of phases match the number of windings on the stator while the rotor poles can be any number of pairs depending on the application.

And because the rotor of a BLDC motor is influenced by the revolving stator poles, the stator pole position must be tracked in order to effectively drive the three motor phases. Hence, a motor controller is used to generate a 6-step commutation pattern on the three motor phases. These six-steps, or commutation phases, move an electromagnetic field which causes the permanent magnets of the rotor to move the motor shaft. 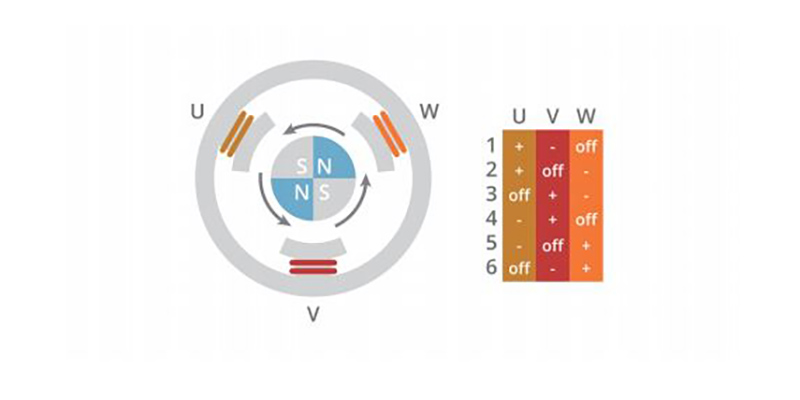 Using this standard motor commutation sequence the motor controller can then use a high frequency pulse-width modulated (PWM) signal to effectively reduce the average voltage observed by the motor, thus varying motor speed. This setup also allows for a large amount of flexibility in design by allowing for one voltage source to be used for a wide range of motors even if the dc voltage source is much larger than the rated voltage of the motor.

In order for this system to maintain its efficiency advantages over brushed technology, a very tight control loop is required between the motor and controller. This is where feedback technology becomes important; for the controller to maintain accurate control of the motor, it must always know the exact position of the stator in relation to the rotor.

Any misalignment or phase shift in the expected and actual position may result in undesirable behaviour and a decline in performance. There are many ways to achieve this feedback for the commutation of BLDC motors, but the most common are Hall effect sensors, encoders, or resolvers. Additionally, some applications rely on sensorless commutation techniques.

Position feedback
Since the inception of the brushless motor, Hall effect sensors have been the workhorse for commutation feedback. For three-phase control, only three sensors are required, and with a very low per-unit cost, they are easily the most economical option to achieve commutation from a pure BOM cost perspective.

Hall sensors are embedded into the stator of the motor to detect rotor positon, which is used to switch the transistors in the 3-phase bridge to drive the motor. The three Hall effect sensor outputs are commonly noted as the U, V, and W channels. While Hall sensors are an effective solution for commutating BLDC motors, they only address half the needs of a BLDC system.

Hall effect sensors will allow a controller to drive a BLDC motor, but unfortunately its controls are limited to speed and direction. With a 3-phase motor, Hall effect sensors can only provide angular position within each electrical cycle. As pole pair counts increase, the number of electrical cycles per mechanical revolution increase and as BLDC use becomes more commonplace, so increases the need for accurate position sensing.

To ensure a robust and complete solution, the BLDC system should provide real-time position information, so that the controller can track not only speed and direction, but distance travelled and angular position as well. 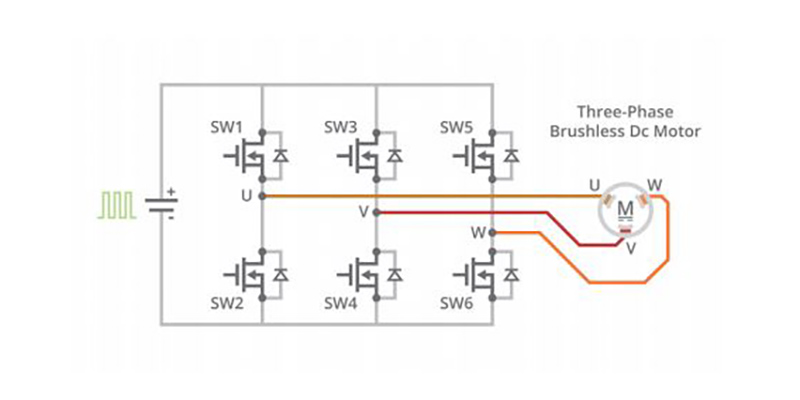 The most common solution to address the need for tighter position information has been to add an incremental rotary encoder to the BLDC motor. Incremental encoders are often added in addition to Hall effect sensors within the same control feedback loop system. The Hall sensors are used for motor commutation, and the encoder is used to track position, rotation, speed, and direction with far greater accuracy.

Since hall sensors only provide new position information at each Hall state change, their precision is limited to six states per electrical revolution; for a two-pole motor, this results in only six states per mechanical revolution. Compared with incremental encoders that offer resolutions in the thousands of PPR (pulses per revolution), which can then be decoded into four times as many state changes, it becomes obvious why there is a need for both.

Although the advantages of this approach are compelling, there is a significant tradeoff to this method. As noted previously, for a BLDC motor to be efficiently commutated, the rotor and stator positions must be known. This means great care must be taken to ensure that the commutation encoder’s U/V/W channels are properly aligned to the BLDC motor’s phases.

For optical encoders that have fixed patterns on their optical disks and Hall effect sensors that have to be manually placed, the process to achieve correct alignment of a BLDC motor is both iterative and time consuming. The method involves additional equipment including a second motor and an oscilloscope. 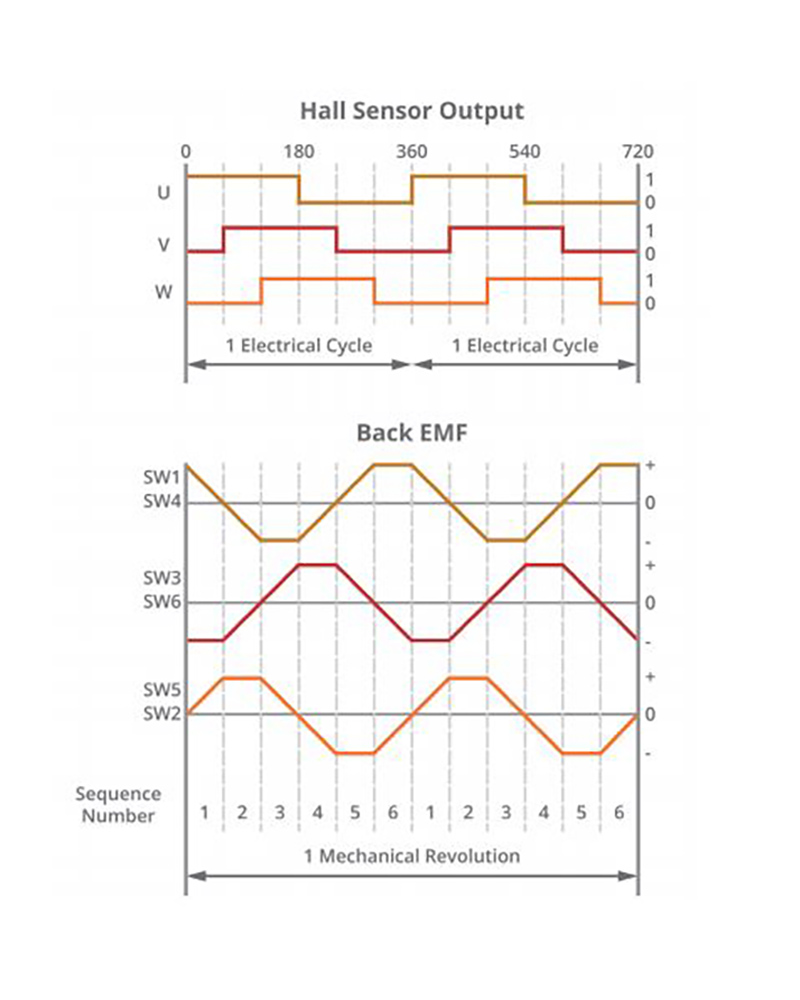 To align an optical encoder or a set of Hall effect sensors, the BLDC motor must be backdriven with a second motor; then, as the motor is being rotated at constant velocity by the second motor, an oscilloscope is used to monitor the counter-electromotive force (also known as back electromotive force or back-EMF) of the three motor phases. The resulting U/V/W signals from the encoder or Hall sensors must be checked against the back-EMF waveform presented on the oscilloscope. If there are any variances between the U/V/W channels and the back-EMF waveform, an adjustment must be made.

This process can take upwards of 20 minutes per motor, requires extensive laboratory facilities, and is a major source of frustration when using BLDC motors. Although optical commutation encoders consolidate the burden to installing only one technology, the downside of implementing an optical commutation encoder is its lack of versatility. Because optical encoders use fixed patterns on their optical disks, the motor pole count, quadrature resolution, and motor shaft size must be known before ordering.

Capacitive commutation encoders
CUI Inc has addressed both problems by offering an enhanced commutation encoder based on the patented capacitive technology used in their AMT family of products. Optical encoders use very small LEDs to transmit light through a disk with notches at specific intervals to generate output patterns.

AMT encoders can be described in a similar manner, but instead of transmitting light via LEDs, an electrical field is transmitted. In the place of an optical disk is a PCB rotor containing a sinusoidal-patterned metal trace that modulates the electrical field. The receiving end of the modulated signal is then passed back to the transmitter where it is compared against the original via a proprietary ASIC. This technology uses the same principle as the Vernier digital caliper, which is known for its reliability and accuracy. 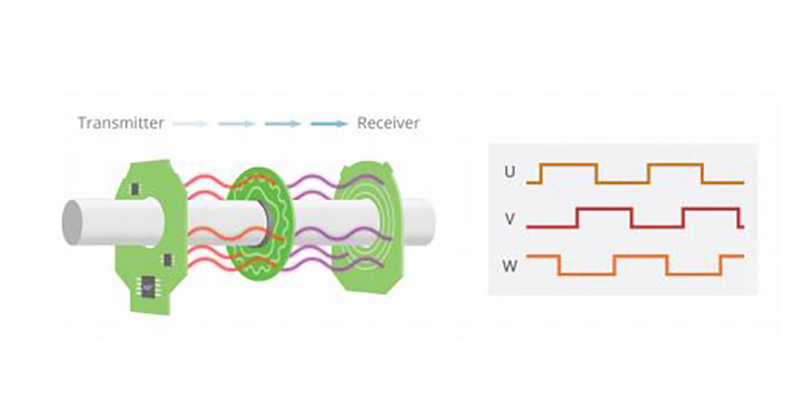 The AMT31 Series Commutation Encoder provides incremental outputs A/B/Z, as well as commutation outputs U/V/W. With a design including a capacitive ASIC and onboard MCU the encoder generates its outputs digitally. This is significant because it allows the user to digitally set the zero position of the encoder with a single press of a button. Simply lock the BLDC motor into the desired phase state and zero the AMT31 encoder with the AMT One Touch Zero module or the AMT Viewpoint programming GUI. This removes the need to backdrive the motor, or to view any of the output signals with the oscilloscope, effectively removing 20 minutes from the assembly process.

And because of the capacitive technology, the quadrature resolution and commutation outputs can be adjusted dynamically. Users simply connect the AMT31 encoder to the AMT Viewpoint GUI, select from a list of 20 quadrature resolutions (up to 4096 PPR) and 7 standard pole pair options (up to 20 poles), and hit ‘Program’. This has advantages in development, allowing engineers to make any changes to prototypes quickly and easily, and also aids production supply-chain management by allowing a single stock-keeping unit (SKU) to be used for multiple motor controls of different resolutions and BLDC pole counts.

The AMT Viewpoint GUI also brings an unprecedented level of design support to the AMT31 series encoder. When connected to AMT Viewpoint, diagnostic data from the AMT31 encoder can be downloaded and used to avoid potential failures and down time in the field.

Conclusion
A tight control loop with high accuracy allows BLDCs to excel in many areas. Increased accuracy means less power wasted, higher precision, and more end user control over the BLDC operation. BLDC motors are currently being implemented in a diverse range of applications, including surgical robotics, driverless automobiles, assembly line automation, and will soon find their place in many other fields not yet conceived. And as the market for BLDC motors grow, the requirements remain the same: robust, efficient motors that offer low cost, high accuracy position sensing feedback.

When paired with a BLDC motor, the AMT31 series encoder is able to deliver valuable savings in time during installation, while also streamlining development and manufacturing. With its high versatility, the ability to be programmed and zero set in seconds, and with its compatibility with the AMT Viewpoint GUI, the AMT31 encoder is well-aligned to meet the needs of the quickly-growing BLDC market.