SICK opens up interface for users 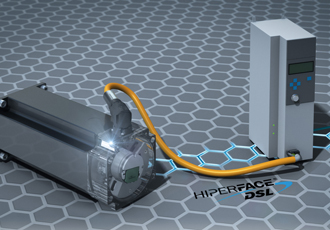 Opening up its HIPERFACE DSL (Digital-Servo-Link) interface SICK has announced it will be available to all its users. When launched six years ago, the interface made a single cable servomotor a reliable proposition for the very first time.  Following the rapid adoption of the revolutionary One Cable Technology, SICK has decided that the interface it invented will now be available as an open protocol.

Darren Pratt, SICK’s Product Manager for Encoders, in the UK said:  “Creating an open interface is the logical next step in the phenomenal success story of Hiperface DSL, especially as manufacturers move towards Industry 4.0-enabled production environments.

“By opening up the proprietary interface, SICK will make HIPERFACE DSL an open market standard. Already major manufacturers have accelerated integration of HIPERFACE DSL digital feedback capability into their product development. In turn, OEM machine builders have been able to optimise costs and space utilisation in their machines.  Machine users have benefitted from an improvement in plant availability due to the reduction in failure points and the extensive condition monitoring capabilities of systems using HIPERFACE DSL.

“As even more motor and motor/drive manufacturers adopt the technology, SICK offers the security of an open and field-proven interface.  The industry is surely set to see yet more extensive machine development and innovation and, in future, the interfaces needed to support servo drives will be minimised.”

HIPERFACE DSL
The HIPERFACE DSL open interface brings together all the advantages of a digital real-time interface: One Cable Technology, continuous condition monitoring and – as a result – enormous potential for improved economic efficiency.

HIPERFACE DSL offers every market partner – motor and drive suppliers, mechanical engineers, and end customers – both technical and economic advantages.  The digital interface meets all the requirements for the condition-oriented maintenance of machines in the Industry 4.0 environment.

Data transmission in the motor cable
HIPERFACE DSL complies with the RS485 standard and enables reliable data transfer between drive and motor in servo drive systems via two wires which are directly integrated into the motor cable of up to 100m in length. Electric drives featuring motor feedback systems and an integrated HIPERFACE DSL interface have a distinctive outward appearance with just one motor connector.

Hybrid cables that combine both servo and encoder elements are becoming increasingly popular. Signals coming from other sensors that are integrated into the digital motor feedback protocol are also transferred. Special processes and the application of pulse transformers ensure that the encoder signal is decoupled from disturbances created by the motor power cable cores.

HIPERFACE DSL supports the functionality of the electronic type label for automatic drive configuration. Motor specifications, serial numbers and part numbers, and other data are stored here and used to adjust the drive to the motor parameters automatically and when servicing is required.