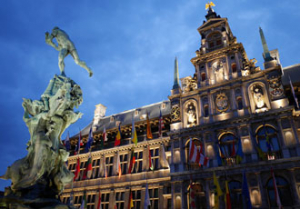 The last thing a city needs is for its critical infrastructure to be affected by a power failure. That includes its city hall. That’s why E. Van Wingen, a Belgium-based manufacturer of high-end engine-based power solutions, turned to WEG, to assist with a secure back-up power supply for the Stadhuis, Belgium.

A city hall is not only the chief administrative centre of any given metropolis, being the base of its mayor, but is also a symbol of local government. The Stadhuis of Antwerp, the capital city of Belgium’s Antwerp Province in the Flemish region, therefore requires strict security protocols. In fact, the risks associated with Antwerp’s city hall is higher than many other government centres.

“The Stadhuis isn’t far from Antwerp harbour, which happens to be the second-largest petrochemical cluster in the world after the one located in Houston, Texas, US,” explained Werner Joosens, Project Manager at WEG Benelux. “A power blackout would not only result in an unhappy mayor and staff but, if caused by a malicious Distributed Denial of Service (DDoS) attack, could pose significant risks.”

“Should the system ever be compromised, a crisis situation could ensue for the local resident petrol companies, and the harbour itself could then present a ‘ticking time bomb’,” continued Joosens. “While this is an extreme example, E. Van Wingen turned to WEG to help ensure the right power backup safeguards were in place.”

When tourists in Antwerp admire the Stadhuis’s magnificent 16th-century façade, they probably don’t consider the importance of cyber security for the building. They are also unlikely to consider the electric motors in its basement, and the role they play in maintaining the secure power supply.

A diesel engine drives the shaft of the building’s power generation. This is checked once a year to ensure it’s working, and supplies 400V that power the city hall’s computers and other systems.

The Stadhuis required a synchronous motor. “Syn” means “in time with” or “in sync with” and “chronos” means time. A synchronous motor literally operates in time, or in sync, with the power supply.

“Synchronous generators remain the most efficient electrical drive in industry,” explained Joosens. “They can be designed to operate effectively, and with great economy when converting mechanical power to electrical energy. They are also  shown to reduce power costs and improve efficiency of the power system. In a few years, savings in power bills may equal the original investment of the generator.”

For the Stadhuis, however, WEG would go a step further. For the project, WEG supplied its new generation exciter generator equipped with high-intensity magnets for higher-quality power. The 135 kilo-volt-ampere (kVA) generator, type GTA251AIHD, has four poles so is capable of 1,500 rpm.

The synchronous type GTA251AIHD generator uses a static exciter, designed with a slip ring motor with brushes - usually made from graphene or carbon to improve conductivity - for transferring power from DC supplied directly to the generator.

They are used in operations that require high performance and adaptability. This is particularly useful in industry sectors such as mining, steel, paper and cellulose, sanitation, oil and gas, cement, rubber and energy transmission. But what advantages would the system offer for the Stadhuis?

For a start, WEG’s new generation exciter generator had a lower initial cost compared with larger, higher output generator. It also offered greater performance reliability and easier generator speed control. The generator can be used in applications requiring high starting torque or low starting current and, while these qualities are useful for heavy load inertia applications, for the Stadhuis they could be essential in instances when back-up power is required to kick-in.

WEG’s generators are equipped with a automatic voltage regulator (AVR). The AVR is a device designed to regulate voltage automatically — that is, to take a fluctuating voltage level and turn it into a constant voltage level. Its function is to automatically control the generator voltage and keep it constant when the rotating speed changes. This prevents the generator voltage from being too high or the battery overcharging.

The AVR is important in relation to cyber-attacks, as it helps to keep the power and the output stable against fluctuating generator speeds. At the same time, it also prevents the generator voltage from being too low, which can result in malfunctions in equipment and insufficient battery charge.

“Electronic voltage regulators are found in devices such as computer power supplies,” added Joosens. “Were anything to go wrong at the Stadhuis, the voltage would be stabilised - this is vital for ensuring that the city hall’s computers can continue to run smoothly, without damage or failures caused by high voltages.”

WEG also gave extensive support to E. Van Wingen so the customer could install and fit the motors, explains Joosens: “We sent them the technical details, including 3D drawings used in their designs. Because the motors are in the basement, everything had to be accurate in line with their specifications.”

Thanks to the reliability of the generator supplied by WEG, visiting tourists, employees and even Antwerp’s Mayor will never have to consider the backup power in the Stadhuis’ basement.

The partnership between E. Van Wingen and WEG remains integral to this important symbol of Antwerp’s local government, protecting it from blackouts and cyber attacks - the last things any city needs.