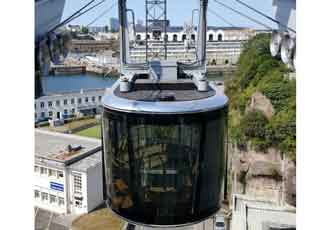 Two cable cars have been boosting the urban mobility in the French city of Brest, since November, which can carry up to 60 people who travel more than 400m above the River Penfeld, with a power consumption that is potentially close to zero. Supported by Leroy-Somer, the companies Bartholet France and Seirel are behind this achievement which is a world first in terms of technology.

Brest Métropole wants to refocus the city over the banks of the River Penfeld. The cable car system is aimed at strengthening the trade links between both sides of the river. With a range of 420m it links the city centre with the new Capucins district, which has been built on 16 hectares of former military grounds.

The structure designed in accordance with original and innovative technology where the two lines cross over each other via a ‘flyover’ system is a first internationally. The two cable cars cross over each other instead of passing each other at the same level as traditional cable cars do, and they then arrive at the same platform. The scale of the system and the stations, including the ground required, are reduced as a result, thereby also resulting in a reduction in overall civil engineering costs.

This is a particular benefit in an urban environment where space is limited. This innovative approach enabled preservation of the Capucins station building, which is protected as a national historical monument. As such the cable cars cross one single steel pylon which integrates into the surrounding environment of dockyards and their cranes. Each car is attached to two carrying cables 50mm in diameter stretched to 88 tonnes. The counterweight effect generally observed on mountain installations is avoided as the cable cars move simultaneously over most of the route.

Low power consumption
One of the challenges posed by Brest Métropole involved implementing a solution with low power consumption. The idea was therefore to recover the braking energy, but the energy operators have not yet systematically developed the full potential for reinjection of current into their network. The legislative framework provides for this, for solar energy production for instance, but certainly does not do this when the system consumes and reinjects current over very short cycles, as is the case in Brest. The solution therefore consisted in storing energy in super capacity batteries when the cable cars are descending, in order to then reuse this energy for the subsequent ascent.

The project was awarded to Bartholet France for the cable car system, and to Seirel, an expert in electrical equipment and safety automation, for the transportation via cable. “We made contact with several suppliers, and only Leroy-Somer had the experience with this type of application, and was also able to provide all of the electromechanical components”, explained Thomas Savin, Project Manager for Seirel Automatismes. 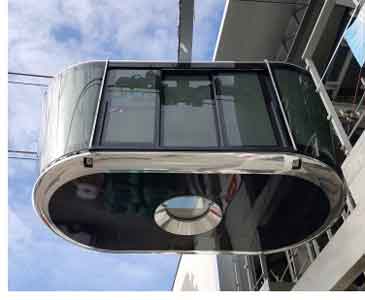 The heart of the system, i.e. the drive for the traction cables, is driven by two latest generation Leroy-Somer IMfinity LC 315 asynchronous motors (300kW, 1500rpm, 460V) with liquid cooling, assembled as master-slave on the same shaft. This installation provides the additional option of double redundancy since just one of the two motors is enough to continue operations in degraded mode (low speed).

The motors are controlled by two Leroy-Somer Powerdrive MD2S inverters, which are in turn supplied by Powerdrive MD2R active front-end rectifiers connected to the power network. A DC converter, also from the Leroy-Somer range, enables management of the operations for the M65V385F supercapacitors developed by Blue Solutions (Bolloré Group). The supercapacitors have been specially designed to meet the needs of industrial applications requiring high power ratings. Meeting the most demanding functional specifications, they charge and discharge in just a few seconds and provide service lives of several hundred thousand cycles.

”This achievement would not have been possible without Leroy-Somer’s expertise in project engineering”, said Guillaume Bourgoint, Marketing Applications Manager for Leroy-Somer. “Through relying on a huge range of motors and variable speed drives based on different technologies, we are able to offer our clients custom solutions in terms of drive and automation systems. As such, linking the IMfinity LC motor, characterised by silent power, with the Powerdrive MD2 inverter, with custom power, seemed like the obvious solution to us given the specifications and constraints of the application”.

“We appreciated Leroy-Somer sharing its expertise and helping us during the project design phase with its solution-based approach and experience. What’s more, having just one single point of contact responsible for all of the moving components was the perfect guarantee for us in a project as ground breaking as this one. We specifically wanted one single supplier for the motors and their controls. We have traditionally used a different brand of converter, but configuring the Powerdrive MD2 from Leroy-Somer turned out to be child’s play”, added Thomas Savin.

In the event of network loss, an emergency mode using an electric generator with a LSA 44.3 low voltage alternator, also manufactured by Leroy-Somer, enables the cable cars to be returned to the stations. Safety has been reviewed right down to the last detail in order to ensure protection against any eventualities.

“This is the first time a cable car system has included an energy recovery solution with batteries. This achievement is a direct reflection of our company, which is able to position itself on more complex engineering projects, and will no doubt be an inspiration for other projects around the globe”, explained Nicolas Chapuis, Managing Director at Bartholet France.

Silent and compact
“Another challenge in the project was that the area available for installing the motors was in the immediate proximity of the passengers. The project’s ground breaking industrial design meant that the motors are just a few centimetres behind a glass cabinet visible to users. The equipment therefore had to be silent and compact for the purposes of the site ergonomics and for passenger comfort. Once again Leroy-Somer stood out against the competitors in this area too with its IMfinity LC motor solutions”, added Chapuis.

With liquid cooling, the IMfinity LC asynchronous motors are up to 25% more compact than a motor cooled using air with equivalent power. Their sound level is also reduced by 10-20dB, thereby enabling optimum acoustic discretion. This benefit is explained by the efficiency of the cooling circuit which surrounds the motor system entirely.

Its dependable design and Premium IE3 energy efficiency make it one of the most accomplished motors in the IMfinity range. “The LC series, available from 150kW to 1.5MW, is ideal for all cases where the motor is close to the operators or users of the application. It meets the increasingly urgent need for acoustic comfort related to working equipment for teams in workshops or for users located nearby”, explained Bourgoint.

Significant benefits
The route for this cable car system is particularly suitable for an energy recovery system, as it is implemented initially during ascent and then during descent, with the departure and arrival points both being at an equivalent altitude. Energy is consumed in order to arrive at the line’s summit point. Once this point has been crossed, the descent phase constitutes a source of braking energy that can be reinjected into the system in order to supply the ascent once again, thereby resulting in a very significant reduction in energy costs.

“This achievement could potentially be used as an example for other industrial applications, such as for lifting”, explained Savin. “The theoretical energy savings amount to more than 90%, but the main obstacle today relates to the supercapacitors. Here we sized them in order to store around half of the energy required, and this itself represents an investment of €200,000. This cost will probably fall rapidly in the near future.”