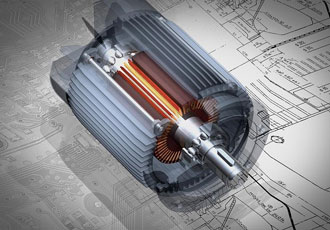 The regulations being placed by statutory authorities for replacing existing outdated motors with highly efficient motors are also going to be a major driver of the industrial motor market in the developed economies.

Due to its lower manufacturing cost and higher end-user demand, the Asia Pacific region is the fastest growing motor market. China is shifting towards IE2/GB3 motors that will lead to the highest growth rate of motor sales in China. Japan is also shifting towards IE3 industrial motors.

What is an Industrial motor?
A motor is a device that changes electrical energy into mechanical energy. The magnetic motors involve current carrying conductors and magnetic fields. Electric motors are widely used for commercial, industrial and residential applications like pumps, fans, elevators, compressors, and refrigerators. The electric motor also finds its application in heating, ventilation, motor vehicles, cooling equipment, and many other house appliances as well.

Many strict rules such as lower electricity consumption and rising awareness of reducing greenhouse gases are leading to an increase in the demand for new generation energy efficient motors all across the world.

Market size and analysis
In the coming years, the Asia Pacific region will continue to dominate the industrial motor market. Many developing countries are seeing a substantial increase in the demand for industrial motors from industrial consumers. Additionally, the growth in the infrastructure sector is also contributing to the rise in demand for motors.

In North America and Europe, the regulations of replacing the existing motors with high-efficiency new generation motors is also expected to contribute to the growing demand for motors. The demand in downstream industries in emerging economies is also set to boost the market for industrial motors in these regions.

In 2017, the global industrial motors market revenue was approximately $51.5bn and by the end of 2019, it is predicted to reach a total valuation of $58.8bn. The continuing trend of replacement of old motors with new motors also contributes to the expansion of the industrial motor market. The most common applications of industrial motors are blowers, pumps, industrial fans, material handling, and processing.

As per latest research, around 193 million units of industrial motors were shipped in the year 2013 and the number is predicted to reach a total value of around 257 million units by 2019 with an average annual growth rate of five percent from 2014-2019. The integral horsepower motors that is the motors with power above 0.75KW holds a large share of industrial motors market i.e. around 56%.

There is also a huge demand for custom made motors because of the extreme operating conditions and space constraints across various industries. Many industries such as cotton and pulp, paper and mining industry are registering impressive growth and are expected to boost motor sales substantially.

Drivers of the Motor market
The cost of electricity is increasing steadily across the world. As a result, it is important for manufacturing industries to ensure that they replace their old motors with new generation motors. This awareness has encouraged many manufacturers to purchase new industrial motors, thereby contributing to the growth of the market across the world.

The increase in energy costs will also contribute to the increasing demand for highly efficient motors. The ongoing research and development in motor technologies is predicted to expand its use in many other applications as well leading to higher sales.

Constraints of Industrial motor market
There are many barriers in the adoption of highly efficient motors such as buyers or consumers being cost-oriented and thinking in terms of short term saving rather than focussing on the long term cost assessments. Also, in spite of buying a new motor, the consumers try to repair the existing motors.

Additionally, the low barriers to entry have led to many small manufacturers entering the industrial motors market. Thus, creating intense competition which drives down the profitability of the sector. It could lead manufacturers to use cheap quality raw materials to keep the costs down, thereby reducing the quality on offer.

Moreover, the standard life of an industrial motor is around 15 years, this means the frequency of repeat orders is reduced, restricting growth potential for small manufacturers.