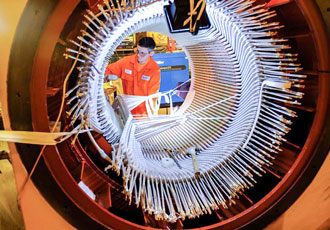 Conducted at the University of Nottingham, an extensive joint research project has found that energy efficient motors remained within plus or minus 0.5% of their original efficiency after being repaired by a good service centre. This is within the specification tolerances of the label and efficiency banding. These tests were backed by a number of leading international industrial organisations and Government Departments in the UK and USA. Tim Marks of the Association of Electrical and Mechanical Trades (AEMT) reviews the projects and their findings.

The Good Practice Guide and research details are freely available from the AEMT Website.

The first Best Practice Guide to maintain Energy Efficiency was produced by the AEMT in conjunction with Department of the Environment, Best Practice Programme on Energy Efficiency. It was led by Professor David Walters, who had previously led the Brook Crompton design team on their ground breaking W range of energy efficient motors.

The project remains the largest study of its kind with tests being carried out on 34 electric motors. These were 5.5 kW D132S machines supplied by manufacturers. They included 13 old design aluminium motors, 13 original design ‘Energy Efficient’ motors, and 8 ‘higher efficiency’ motors. A major difference between the machines was the quality of their stator laminations. The ‘Higher Energy Efficient’ machines were some of the first to use a high grade steel coated with an inorganic based L3 film. This heat resistant varnish film increased the ability of motors to withstand annealing temperatures, and withstand multiple burn out temperatures without any detriment to the core laminations, as shown by tests during the project. Improvements in the electrical steels using L3 or better have formed the basis of new energy efficient machines over the past 20 years. This is shown in figure 1, below, extracted from the original project.

A few years later the original research programme was expanded to include larger machines up to 225kW. Several Government Departments, electro-technical companies and industry groups - both domestic and international - were approached to join a wide-ranging project to broaden the base of the next research project.

Sufficient machines were included to give statistically reliable results, which increased the cost of the exercise. To mitigate this, the AEMT invited representatives of the US Department of Energy and through them the US repair trade association (EASA), both of whom agreed to join the project. The AEMT then approached their own national government for support and further sponsors were encouraged to join. The final list of participating organisations was impressive, and included the UK Energy Efficient Best Practice Program, UK Ministry of Defence (Navy), UK Water Industry Research Centre, and British Nuclear Fuels.

Ten motor manufacturers also became partners to the project providing motors, technical data, and assistance for the study. These included ABB, Siemens, Brook Crompton, GEC (now GE) and VEM from Europe, and Baldor, Leeson, Reliance, US Motors and Toshiba from the USA.

Twenty-four 2-pole and 4-pole motors rated between 5.5kW and 225kW were used in the trial; these included 50Hz IEC and 60Hz NEMA machines with IP23 and IP54 enclosures.

The testing regime was devised by and conducted at the University of Nottingham. Importantly they were independent of the motor manufacturers and the repair industry. They were also recognised as having some of the best researchers and one of the best equipped labs for such work. A 30 kW motor was also tested on a ‘Round Robin’ basis, the same machine being tested at Nottingham and three other reputed test centres in America.

Using the IEEE 112B test standard for efficiency testing, the variation between test stations was within plus or minus 0.5%, which was a good result. Tests used the calorimeter method for loss segregation at no load and full load. Finally, a 75kW machine was kept at Nottingham as a calibration machine to ensure the repeatability of test results over the period of the project.

It should be appreciated that accurate testing of motor efficiency to this required accuracy is difficult, and takes time, 24 hours may be required just to stabilise the machine so that 3 constant readings can be taken and averaged. They can only be achieved in a suitable laboratory. The readings below show those taken for a new machine test, and the same machine after repair, this machine gained 0.2% efficiency after repair.

After stripping and rewinding 5 machines up to three times each, the effect on efficiency ranged from +0.7% to -0.6%. No room for an error in testing, when the Round Robin Results between the test centres varied by plus or minus 0.5%. 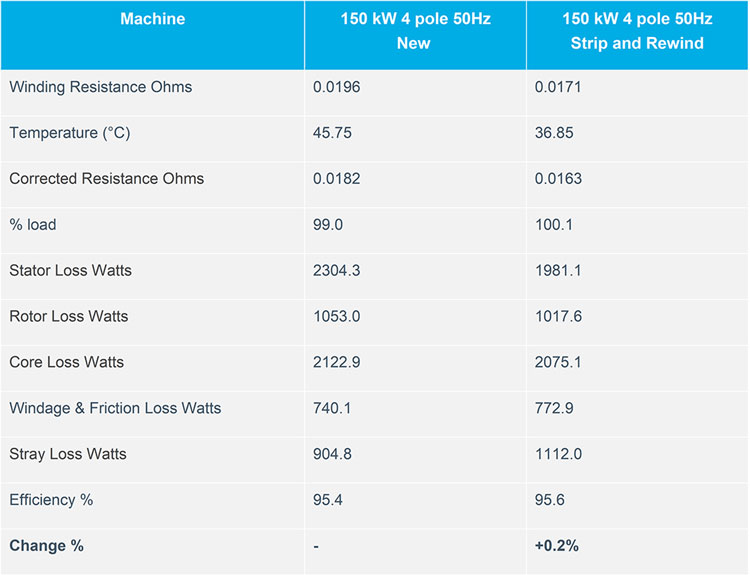 Figure 2 shows the results of these multiple repairs. After three rewinds, the third rewind was still very close to the original efficiency of the machine and well within the required efficiency band. This is probably more rewinds than most motors will go through over their 15 to 20 year life span in a clean modern factory.

There are four basic contributors to the accuracy and repeatability of motor tests:

The research team made certain all of these were consistently maintained for each motor. All tests were conducted in accordance with the internationally recognised IEEE 112 B guidelines, with test procedures, time between readings, and thermocouple location on the winding, all optimised to provide accurate results before the test sequence started. The tests collated data using both the American IEEE 112B method and the IEC 60034 2 readings. Due to the greater accuracy of the IEEE method at the time of the test, these were used for the project and the IEC 60034 2 readings taken to show the difference between the two standards. Recently IEC 60034 2 has been updated to be more in harmony with IEEE 112B. Recent tests have shown that the difference between the two standards is now minimal.

Each motor was tested as new and then sent for stripping, rewinding, and tested again. Some machines were rewound and retested multiple times as per figure 3 below. Comparisons could then be made between the motor ‘as new’ and after each repair and rewind. 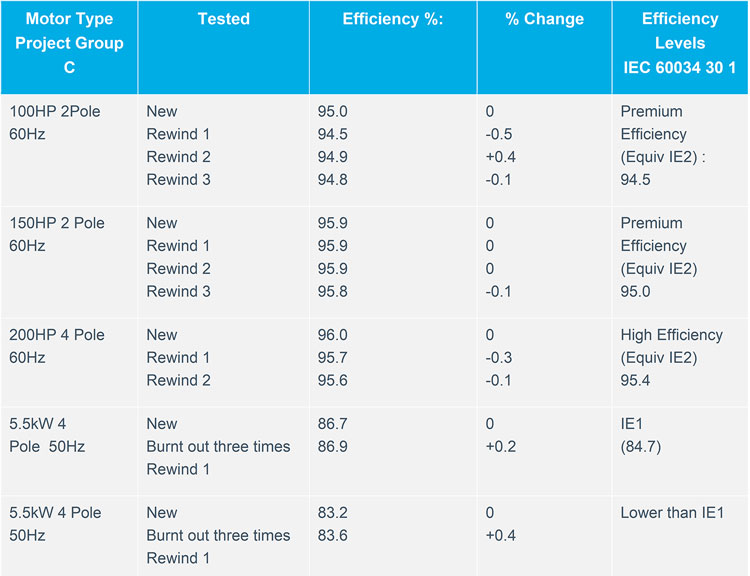 Motors were sent to a repair workshop, who used the original AEMT Best Practice Guide; others were sent with specific instructions concerning winding configuration, copper section, mean length of turn (MLT) and other design characteristics, the results of these were then used to update to the new Good Practice Guide to Maintain Energy Efficiency.

Tim Marks is convenor of the maintenance team reviewing an update of the International Standard IEC 60023 34 for Rotating Machines: Repair, overhaul, and reclamation. All the hard work from the initial two projects above has been incorporated into the new IEC International Repair Standard, which is on schedule for publication in 2018. The new standard includes all the recommendations that came out of the above extensive projects to ensure that repairs to the new standard will maintain the rated efficiency of machines after repair.

It is not surprising that the repair process maintains the efficiency of modern machines. Generally a repair will re-use the majority of the machine sent in for service and repair.

Items that ensure the efficiency is maintained are:

Bearings: Normally the only wearing parts of an electric motor are the bearings and seals. Most AEMT members use high quality bearings during a repair, which are as good as, and sometimes better than, the original specification. Energy efficient bearings may be fitted which are rarely used in the manufacture of standard machines.

Cooling: the fans are rarely damaged and are normally refitted. Good practice ensures a fan of the same size as the original is refitted. This maintains the same level of cooling and energy efficiency.

The Rotor: Although a shaft may become worn and require reclamation, the electrical properties of the rotor and the air gap between the rotor and stator are not normally items that alter during overhaul and repair. A damaged shaft may be replaced with new after a critical failure, or the shaft reclaimed on larger machines. The energy efficiency of the rotor will be maintained during repair.

The stator: Stator laminations fitted to machines over the last twenty years and used in energy efficient machines are designed to be able to withstand a burnout and rewind, and as shown throughout the projects the laminations now meet higher standard specifications designed to withstand even higher temperatures. Insulation and varnish materials have improved by leaps and bounds over the past 20 years and now workshops use materials as good as, and sometimes better than those used during manufacture. With products as good as the original going into the stator repair as when originally manufactured, the efficiency of the machine is going to be maintained, as shown in the above projects. This is equally true for the first, second, or third repair. The same quality of materials goes in as came out, so the same efficiency rating is maintained before and after repair.

The repair process is also very environmentally friendly, the cast iron or aluminium end shields and stator housing are cleaned and reused, steel laminations, and steel and aluminium rotor reused. The steel bearings are virtually always replaced and the steel bearings returned as pure steel to be recycled.

If the windings are burnt out, they are normally removed by hand as pure burnt copper wire, which does not require separating from any other materials when returned to a copper refinery. Considering it takes hundreds of tonnes of spoil, and a large amount of water and chemicals, to get one tonne of copper out of a good copper mine, this is a huge environmental saving. Interestingly 85% of an average copper refineries production is supplied by mined copper and just 15% recycled copper. With current known reserves able to supply the world’s copper requirements for around 60 years, it is not an infinite resource. Weight for weight the service industry returns to copper refiners the same weight of copper removed as it uses, and could exist without mined copper. So the repair of equipment should have a very valuable place in a company’s ISO 50001 policy document.

Good repairers and service centres use materials that are as good as or better than the original specification, the machine designs are also to a much higher standard to enable a much longer service life.

Most AEMT Service Centres will sell, service and maintain electrical machines and can give an unbiased view as to why a machine failed and whether to repair a machine or buy a new replacement.

More from AEMT (The Association of Electrical and Mechanical Trades)