Mobile varnish lab is in fast lane to success

Home > Around the Industry > Mobile varnish lab is in fast lane to success
9th October 2019
Source: AEMT (The Association of Electrical and Mechanical Trades)
Posted By : Alex Lynn 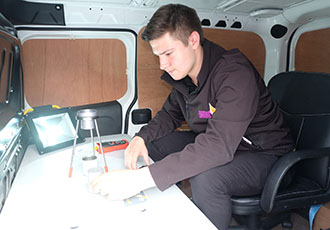 A mobile resin and varnish condition-testing laboratory, has paid off for AEMT, which manufactures specialist insulating and encapsulating resins and varnishes, for the worlds electrical industries. With its first year of operation completed, the mobile lab service is showing every sign of success.

Joe Turnick, the Technical Support Engineer who runs the operation, said: “I have visited over 170 companies, most of them twice or more. The core of what I do is on-site testing of customers’ stocks of resins and varnishes for viscosity, solids and other key parameters. I also collect samples for comprehensive testing in our main laboratory at Birkenhead and advise on related matters such as storage conditions and new product developments.”

Resins and varnishes are precision-formulated, but can thicken or become contaminated over time, particularly if they are stored in less than ideal conditions. Degraded compounds may fail to fully penetrate the components to which they are applied, which for the users could result in an end-product that looks fine, but which may not meet its technical specification.

“By taking the lab to the customers, we make their busy lives easier, which allows them to concentrate on their own key operations,” added Turnick, who has already driven the ‘lab in a van’ 25,000 miles through 46 of the 48 counties in England and Wales.

“Because mobile testing was a completely new idea, we did not know how the market would respond, so we used a flexible roll-out strategy that we allowed to evolve over the first few months.”

The level of requests for a second visit was higher than predicted, so AEV divided the country into north and south with an initial concentration on the south. It has now moved to the next phase, developing optimised routes through the north of England and is beginning to think about Scotland too.

Originator of the mobile lab idea, AEV Sales Manager Chris Birks, has even grander plans. AEV has just acquired a similar resin manufacturer, Korax, in Hungary, so Chris and Joe have taken time out to see the manufacturing plant and visit customers in Hungary and Poland. Chris reports:

Birks said: “The Hungarian clients we met all thought that Korax joining the AEV group was a very positive move and when we told them about the mobile laboratory, they really liked the idea. We promised the first few we would roll the idea out as soon as possible. Then, when nearly everyone said they wanted a visit, we knew we just had to arrange a properly organised tour.”

Birks has also been monitoring how the UK market has reacted to the van. He says that once people saw what could be done, they embraced it and even began asking for extra services.

Birks added: “Twelve months ago it was such a novel idea that we could not possibly know what people would think, so introducing it was a leap in the dark. Setting up the first few appointments was a bit of a struggle – I think people were worried it would be a waste of time. But in almost every case the visit turned out positively, with the clients quickly appreciating the service we were offering. Even more exciting was the fact that many saw further potential and suggested ideas for expanding our capabilities.”

He goes on to explain that the personal contact Joe establishes with the customers is proving valuable. In many cases they start asking for advice with their storage arrangements, process management and other related subjects.

Looking to the future Birks says: “Joe’s role has developed, going beyond testing to offering consultancy and key account management, particularly with our OEM customers. We already have customers in the North and Scotland looking forward to their first visit. We are also planning strategies to service our new clients in Hungary and Poland, then expanding into other countries.

“A year ago I was worried in case we did not find enough work to keep Joe and his amazing van properly busy. Now, I am wondering how we are going to keep up with demand over the next twelve months!"

More from AEMT (The Association of Electrical and Mechanical Trades)