Efficiency is top of the list for ABB motors 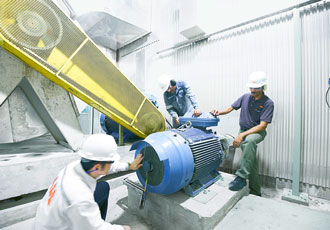 Everyone wants to set a world record, what a wonderful achievement that is. When you think about a world record, quite often you picture winning a race or some kind of sport, maybe even the Olympics? However world records come in all different shapes and sizes, and just like in sport, setting a world record in an industrial operation depends on numerous factors that must be perfectly aligned and optimised to get the best result.

Instead of a Gold Medal, for industry the reward is lower operating costs and less environmental impact.

But what do champion athletes have in common? The answer, in large part, is efficiency.

Comparing humans and motors – energy losses are the key
Efficiency, for a world-record athlete, can be seen as the ability to use the correct inputs, such as muscle power, training routines, food and nourishment in the most efficient manner to achieve the given task better than anyone else. That task is often focused on moving themselves, or an object, faster, farther, or higher than anyone has ever before done.

Electrical motor efficiency can be described in a similar manner, where the input is the electrical power and, if you have the best design parameters and highest quality components, you will get the highest mechanical power output. For a human to set a world record, a critical key factor is to limit your energy losses so you get the maximum output. It’s exactly the same for motors; lowest energy losses mean highest motor efficiency.

Today, electric motors use an estimated 28% of the total electrical power consumed worldwide. Reducing that consumption by just a fraction of a percent can have a very significant impact on electricity consumed, giving benefits in terms of costs for running the industrial operations, as well as CO2 emitted to generate the electricity.

ABB recently set the world record for electrical synchronous motor efficiency. During factory acceptance tests (FATs) carried out with the customer present, the company recorded a result of 99.05% full load efficiency on a 44MW, 6-pole, synchronous motor. The motor was included in a contract for six motors of the same design and they all had test results above 99% efficiency. The contract had guaranteed an efficiency of 98.80%, meaning that the efficiency on this motor is 0.25% greater than anticipated.

Over the lifetime of a motor, the 0.25% higher efficiency can be very significant in terms of money and energy savings, as well as profitability and environmental impact.

A typical efficiency for this type of synchronous motor is approximately 98.2-98.8%. Calculations show that the 0.25% efficiency improvement will save the user approximately $500,000 in electrical energy costs over the course of a 20-year lifetime. This is just for a single 44MW 6-pole synchronous motor. With electricity costs being, by far, the largest component in the total cost of ownership of such a motor, savings like these have a significant impact on profits.

CO2 savings are also significant. On average in Europe, producing 1kWh of electricity emits 0.45kg of CO2. Thus the 963.6MWh saved with this single motor means 4.3 tonnes less CO2 being emitted to the atmosphere every year. Over the expected 20-year lifetime, that is 86 tonnes of CO2 greenhouse gases saved. Thus, this might be seen as a world record in both costs savings and climate savings.