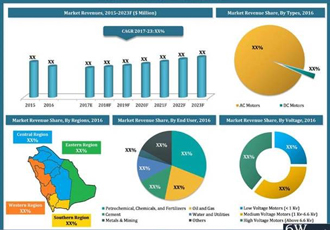 The key drivers for the growth of electric motor market in Saudi Arabia are expansion of public infrastructure, government policies to support establishment of new industries and large scale investments in the power and water utility sector. However, the market volume declined in 2016 due to lower government spending as a result of budget deficit on the back of falling crude oil prices. According to 6Wresearch, Saudi Arabia electric motors market revenues are projected to grow at a CAGR of 5.3% during 2017-23.

Growing petrochemical and chemical industry, increasing investments in infrastructure projects along with increasing water and electricity consumption owing to rising population are some of the factors which would drive the Saudi Arabia electric motor market in the forecast period. Further expansion of the non-oil sector would also fuel the market over the next six years.

Ravi Bhandari, Assistant Manager, 6Wresearch, said: “Motors for pump application accounts for highest revenue share and is expected to dominate the market through the forecast period on account of growing demand from oil & gas and petrochemical sectors. Other key application areas include fans, compressors and conveyors.”

According to Prakhar Srivastava, Research Associate, Research and Consulting, 6Wresearch: “Petrochemical, Chemicals and Fertilisers (PCF) segment accounted for the major revenue share in Saudi Arabia’s electric motor market. The PCF segment would further continue to dominate the market in the forecast period primarily due to upcoming downstream petrochemical projects in the country. Project such as $20bn Sadara petrochemical facility in Jubail shows the commitment of Saudi Arabian government towards shifting its economical dependency from oil & gas sector to non-oil sectors. Further, it also reflects stringent government policies to strengthen the petrochemical downstream industry by increasing plastics and chemical production in the Kingdom.” 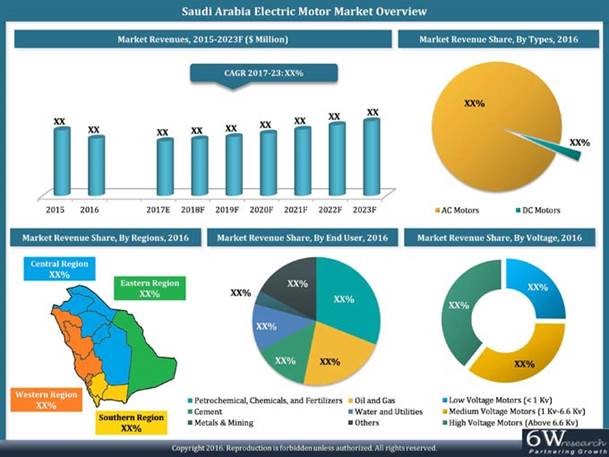 Some of the major companies in Saudi Arabia electric motors market include ABB, Siemens, WEG, Teco and Nidec.