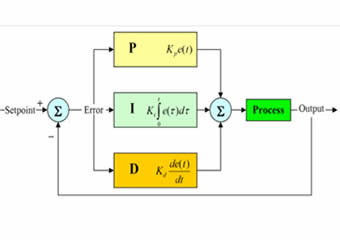 The PID controller is one of the most used control algorithms in any closed loop system.

In general, these 3 terms act independently from each other and their outputs are summed together to create a single PID output signal.

Other configurations are possible as well. For example, derivative term may act only on the feedback (output) signal, not the error signal, with proportional term in parallel with integral term.

One of the best ways to evaluate PID tuning, is to look at the step response of a system. In order to make sure that the system does not saturate and to avoid strong nonlinearities, small signal excitation and its response will be used. In addition to looking at the position response, torque will also be observed, as a measure of ‘how hard we are driving’.

If friction is added to the system, damping characteristics will improve, but larger gains will be required. Addition of the friction will introduce small steady state error, not allowing the system to reach final target position.

This should always be the first step in servo loop tuning. Start with just proportional gain and look at the response.

If the system has a tendency to overshoot quickly, even with small gain, likely the friction is low.

If more gain is required to get any response, and the response is slow, the system has considerable friction. This determines the next step.

In a low friction system, the response has a tendency to become unstable quickly, even with low gains.

To remedy this instability, derivative action is required. Because the D term differentiates the position error which changes fast in case of instability it helps suppress the large changes by creating an opposing torque. In the system above, with the same proportional gain and with some derivative gain following response is obtained. 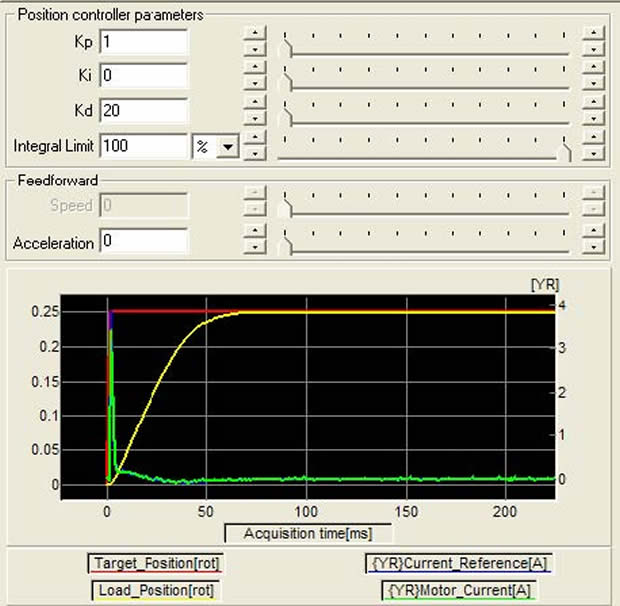 Large overshoot now is eliminated. However, the overall response is also slower (meaning the time required to reach the target).

As noted above, by just using a proportional term, a stable response can be obtained, however the final target is not reached.

With added integral term, the longer the error exists, the larger the integral will become, resulting in a correction torque. In the system above, with the same proportional gain, and with added integral gain, position error (steady state error) is reduced to zero, even in the presence of friction. 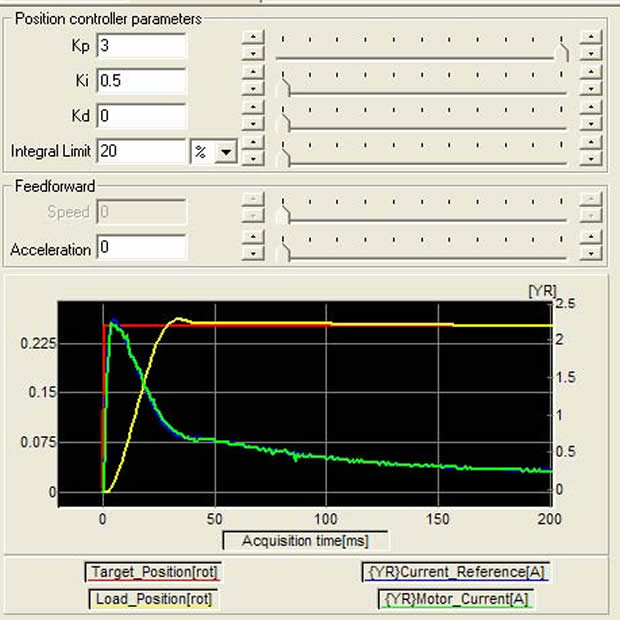 Integral limit (also called anti-windup) should be used with an integral term, to avoid integral term from becoming too large and taking too long to converge down.

Below is a system response as increasing the gains to obtain faster response: 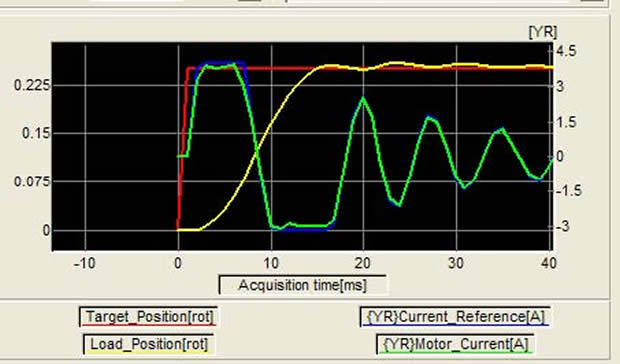 The current limit in the system is reached at 4A. Reaching this limit causes saturation and an ensuing oscillation (which does die out after coming out of saturation).

This means that motor and drive sizing should not only be based on the torque and speed requirements, but also on the required system response.

Lastly the feedback resolution should not just be based on positioning resolution requirements but also on desired system response.

Servo loop tuning is not a trivial task. A hand on experience is invaluable and above information will, hopefully, allow achieving the desired response.

Although the behaviour of the PID algorithm is well understood, there are many implementation details and system parameters that influence the response.

By utilising a systematic approach of increasing the proper gains gradually while monitoring the response, stable behaviour can be more quickly obtained.

In parallel, the current and torque should be observed to determine how much power is applied, or to avoid saturation. If the system is marginally sized, it may be necessary to adjust performance expectations.