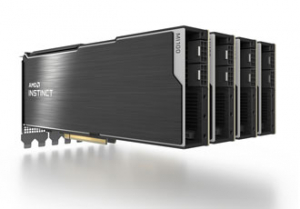 AMD has announced it’s working with Oak Ridge National Laboratory (ORNL) to provide GPUs which can help investigate astrophysics and galaxy formations. ORNL is preparing eight key scientific applications for Frontier, and one of them is CHOLLA, which investigates astrophysics and galaxy formations, one of the first workloads in its class to run on GPUs.

The researchers behind this code have ported it from CUDA to run on AMD GPUs, in preparation for Frontier. They have been able to do this with ease, and are already finding considerable performance improvements, with much more promised when Frontier comes online. The potential benefits for our understanding of the universe are immense

Currently CHOLLA is one of the first workloads in its class to run on AMD GPUs. CHOLLA was created to provide this time-based analysis, particularly focusing on galaxy formation, with its processing accelerated by GPUs.

One of the challenges is the increasing scale and resolution with numerical simulation of galactic evolution with CHOLLA software. By deploying AMD Instinct MI100 GPUs with ROCm open software, ORNL researchers can prepare for the Frontier supercomputer and the CHOLLA workload.

Evan Schneider, Assistant Professor of Physics and Astronomy at the University of Pittsburgh, believes that the Frontier supercomputer will fully deliver what’s needed if it is powered by AMD Instinct GPUs whilst claiming: “Having access to this exascale machine is a game changer for the kinds of problems that we can simulate.”

“GPUs are good at massively parallel local problems,” explained Schneider. “The fundamental problem in computational astrophysics is one of scale. The big picture evolution of a galaxy like the Milky Way depends on processes that are happening at very small scale. In order to understand how that evolves over time, we need to account for the formation of stars and the explosion of supernova within the galaxy and those explosions take place on much smaller scales than the whole galaxy. One of the things that we would like to do is have simulations with higher resolution.”