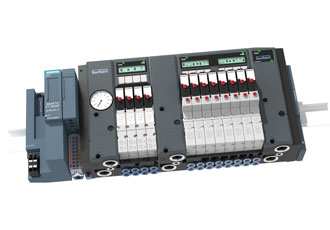 Maximum system availability and process reliability for pneumatic controllers is the goal of a partnership between Bürkert and Siemens. The result of the cooperation is the new Type 8647 AirLINE SP valve island, which is compatible with the Siemens I/O system SIMATIC ET 200SP. Bürkert will present the valve island system at SPS IPC Drives in Nuremberg from 22nd to 24th November 2016.

The valve island was developed for use in the food and beverage, pharmaceuticals and cosmetics industries, as well as in water treatment systems.

To save space it can be mounted in the control cabinet together with different Siemens modules for controlling up to 64 valve functions. The valves are directly connected to the Siemens I/O system.

This enables fast and seamless integration both at the time of commissioning and later, during monitoring of operation. The display of the number of switching cycles allows optimal preventive maintenance of the system to minimise wear and down-times.

Maximum system availability is achieved by means of the pneumatic valves in the supply channel: they are hot swap capable, so they can be replaced during operation.

Status information enables fast reaction
The Type 8647 AirLINE SP valve island features pressure sensors and an LCD, which displays detailed status information such as the position of the pilot and process valves directly at the device - both by means of icons and plain text.

This enables fast detection and elimination of faults. The use of ring topology and the Media Redundancy Protocol (MRP) ensures continued operation of the system in the event that a communication client fails. This increases system availability and ensures the reliability of the customer’s process.

Mixing of media is impossible
Like all Bürkert valve islands, the Type 8647 has a crucial safety function: check valves in the exhaust duct. They ensure that pilot valves and actuators operate reliably, by preventing pressures peaks. This eliminates the possibility of any mixing of different media.

Bürkert will exhibit at SPS IPC Drives in Hall 3A, Booth 161.