Creating a pharmaceutical manufacturing suite is a complex task that is governed by a host of standards and specifications. For the AstraZeneca manufacturing plant in North Ryde, Sydney, Australia, the decision to change its primary supplier of process control valves to Bürkert, reduced installation and commissioning costs while also improving process data availability.

The world-class AstraZeneca manufacturing facility in North Ryde has recently been expanding and increasing its production facilities for a respiratory medication that is used to control and treat symptoms caused by asthma. This involves batch processes that consume large volumes of water for injection (WFI) and has a need for both clean in place (CIP) and steam in place (SIP) processes.

Making an introduction
The aim of this latest expansion is to fully automate and modernise the production process as well as increasing efficiency and safety - whilst also meeting the strictest pharmaceutical standards. The project involved three solution preparation suites where the active ingredient is combined with WFI and other ingredients to create a batch of medication. Once the batch has been discharged from the storage containers, either CIP or SIP processes are used to clean the production pipework and vessels, ready for the next batch.

Ryan Orbell, National Segment Manager - Hygienic, for Bürkert in Australia explained: “The project was already specified and quoted when we became aware of it, however I knew Bürkert could offer improved functionality and save on installation time compared to the products that had been specified. I contacted the project team at AstraZeneca to explain how Bürkert could deliver a more effective solution.”

This system format would minimise wiring, installation and commissioning costs as well as providing more information about the manufacturing process itself. One of the attractive points for AstraZeneca was the ultra-bright LED optical lighting on the valve control heads, which offers operators a clear visual status indication at a glance. 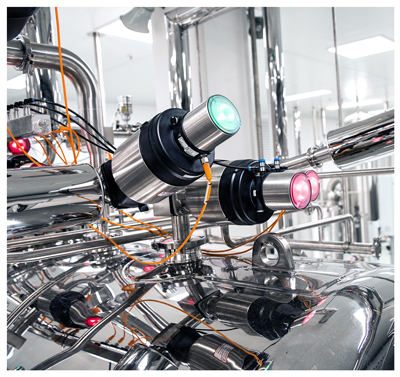 This is a standard feature on the Type 8691 control head which is designed for use with ELEMENT Type 21xx process valves. The powerful LEDs provide the status of the valve – green for open, amber for closed and red for a communications error. However, this sequence did not match with the existing SCADA system operator interface already installed on the site.

The engineering team at AstraZeneca asked if the colour sequence could be changed to match theirs. The immediate reply from Bürkert was to put a request into the Systemhaus design team in Germany. Bürkert’s Systemhaus facilities develop new engineering solutions, from concept, costing and development all the way to assembly and testing. Within a week, a new, bespoke printed circuit board had been created and released as an AstraZeneca-specific option for the control heads. This meant that any valves ordered in the future with this option would provide status signals that matched the rest of the production facility.

Testing the solutions
From the outset, one of the initial sticking points was the fact that some valves on long lead times had already been ordered from another manufacturer. Bürkert control heads are designed so that they can be retro-fitted to other valve bodies and still provide reliable service. However, the AstraZeneca design team being risk adverse with such a critical application, required further evidence that this would not introduce, or pose a potential threat to any failures or loss of batches, so requested for some factual and evidence-based reliability testing to be completed before a final decision could be made.

Some sample valve bodies were taken to Germany, where Bürkert’s engineering and testing department set them up with a Bürkert diaphragm, control head and actuator. 50,000 test cycles were carried out during the week on multiple diaphragm valve body sizes and then the membrane wearing parts and valve component conditions were photographed and video images were supplied as evidence. These were taken back to AstraZeneca in Australia to illustrate the durability of the retro-fitted valve design.

Along with this, all of the actual components were taken back to AstraZeneca so they could witness first-hand the actual conditions of the diaphragms after the cycle testing was completed. Test reports were also supplied as part of this process outlining all the test conditions and findings. The Project Engineer with the Capital Engineering Team, explained: “Having completed the testing procedures, we believe we are in good hands with Bürkert, which has proven itself to be a true global engineering company with an understanding and a vision of how to truly add value to process automation applications.”

Saving time and space
One of the initial criteria for the project was to reduce the number of welded joints and minimise the dead space in the system. Bürkert was able to design and manufacture a number of specialty distribution valve blocks that achieved this aim while matching all other hygiene standards applied to the rest of the installation.

This flexibility to design bespoke components impressed the engineering team at AstraZeneca. The Project Engineer continues: “Bürkert has taken a very professional approach to this whole project. Standard products have been available to meet almost every need, while the ability to also design and manufacture custom products in such a short time frame is very impressive. They will certainly feature in our up-coming projects.”

Aside from the obvious hygienic requirements of the process control equipment, there was also a requirement to minimise the space occupied by the production suite. Bürkert's Robolux valve was an ideal solution; it enables two independent valve seats switching functions to be achieved within the one membrane. This reduces the installation space requirement, eliminates T-adapters and halves the total number of membranes, actuators & control heads required per seat and therefore minimises the overall number of hygienic diaphragm process valves.

Talking the same language
An additional benefit of the Bürkert equipment was compatibility with the existing profinet communications protocols in the AstraZeneca plant. Available with several communications alternatives, selecting the ASi interface option for the control heads ensured perfect integration with the Siemens PLCs used throughout the site.

In the final analysis, AstraZeneca decided to opt for all Bürkert equipment, the one exception being a valve body that had already been welded to the base of process tanks. These were fitted with Bürkert control heads, diaphragms and actuators so that all the valves in the new process area would have the same control components.

Orbell concludes: "Having delivered and implemented all of the process control equipment for the first project, Bürkert has since gone on to supply other projects on the site, including a WFI suite, purified steam processes, nitrogen supply and a sterile compressed air project. Our products are now the standard across the solution preparation suites and to all services and utilities applications across the site. In each case, our experienced engineers have offered a combination of standard and bespoke products that work together to deliver the most efficient and reliable hygienic process systems."

AstraZeneca have truly revolutionised their production facilities to meet growing global demand for their products. In partnering with Bürkert, they now have six suites either in full operation or in construction. As part of the project they’ve also completely automated processes for the WFI water purification production plant, clean steam, clean compressed air, nitrogen. The valued partnership has ensured that every step of the upgrade met stringent and demanding hygiene requirements and achieved pharmaceutical manufacturing facility standards.